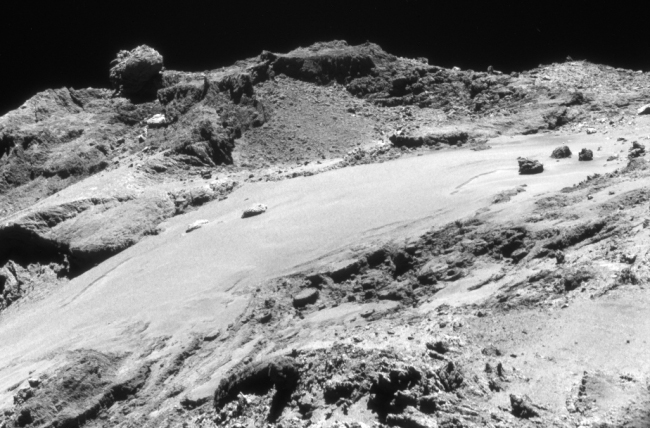 Cool image time! As Rosetta completes a several weeks of in-close observations it took the above oblique view (cropped and reduced to show here) of Comet 67P/C-G. The image was taken from about 7.5 miles with a resolution of about 3 feet per pixel. It shows the Imhotep flat area with the large 80-foot-high Cheops boulder in the center. It is worthwhile to compare this image with one taken in January.. Though the angle is far different, you can recognize the same areas in Imhotep where some of the surface has apparently evaporated away.

What I especially like about today’s image is that it really gives one a feel for what it would be like to stand on the surface here. The light gravity allows some strange rock configurations, such as that giant weird balancing outcrop on the horizon. If you were standing in Imhotep that outcrop would hang above you threateningly.

Following the brief encounter at these close distances, Rosetta is now heading out on an anti-sunward excursion to around 1000 km to investigate the comet’s wider coma, tail and plasma environment. Today, 24 March, Rosetta is already over 200 km away from the comet. The current plan is for Rosetta to make a 30 km zero phase flyby around 9 April, before entering back into closer bound orbits by 21 April.