As Curiosity retreats from rough country, scientists look at the future geology it will see
April 28, 2022 3:51 pm Robert Zimmerman 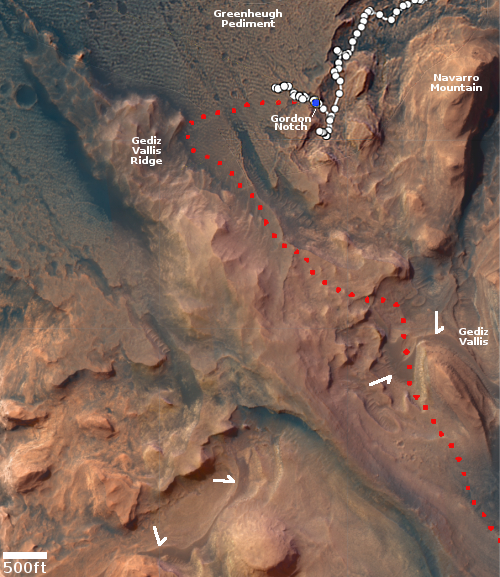 Cool image time! For the past two weeks the Curiosity science team has been gingerly and slowing backing the rover off from the very rough terrain of the Greenheugh pediment, as shown on the overview map to the right. The blue dot indicates Curiosity’s present position, with the red dotted line marking its original planned route, now abandoned.

The main question remains: Where to go next? At this point the science team is still debating their exact path forward. As Catherine Weitz of the Planetary Science Institute explained to me in an email today,

The Curiosity team is still working out the details. Maybe in another month or so the new route will be finalized so stay tuned.

No matter what route they eventually choose, the white arrows mark one of the more interesting upcoming geological features that the scientists very much intend Curiosity to reach. In a paper published at the end of March in which Weitz was the lead author, they describe this “marker horizon” as follows:

This horizon is darker, smoother, and stronger compared to the rocks around it, which is why it stands out in the images observed from orbit. The marker horizon appears as a ledge because it is much flatter than the surrounding sulfate-bearing units. … [It] exhibit[s] evidence for the presence of high calcium pyroxene and other basaltic minerals in contrast to the hydrated sulfate signatures associated with strata above and below it. 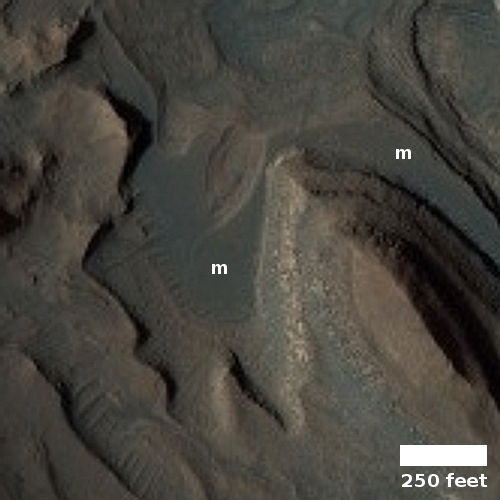 To the right is an enlarged section from a high resolution image taken by Mars Reconnaissance Orbiter (MRO) on October 5, 2012 of the most likely place where Curiosity will cross the marker horizon. The “m” indicates that marker. As you can see, it forms a ledge, suggesting it is more resistant than the material above and below it.

What is most interesting about this marker layer is that it has not only been identified along a 12-mile-long stretch on the north flank of Mount Sharp, it has also been spotted on both the southwest and southeast flanks of the mountain, as far as 40-plus miles away. Its higher content of basalt suggests it might be volcanic in nature, but that remains unconfirmed.

In fact, determining its origin will provide critical data for laying out the geological history of Gale Crater. As the scientists note in the abstract of their paper:

There are several ways the horizon could have formed, such as it is the same as the sulfate-bearing rocks found around it, but the bed became hardened either while it formed or later by water carrying minerals to cement it. It could also be a sandstone or lag deposit that formed when it was drier in Gale crater. Another possibility is that the horizon could be hardened volcanic ash that was laid down when a nearby volcano explosively erupted ash into the atmosphere.

All of these possibilities require the presence of water to cement the material into rock. Though the scientists favor the last option, volcanic ash, they recognize it is not proven. No matter what, the marker will allow the scientists to date a possibly specific and large event in the mountain’s past history. From the press release:

“Some event occurred within Gale crater during the deposition of sulfate-bearing sediments that resulted in a different kind of rock unit. The marker horizon is distinct in appearance from the sulfate-bearing rocks above and below it, indicating an environmental change occurred for a brief time, such as a drier period, or perhaps a regional event like an explosive eruption from a nearby volcano that deposited ash across a large area which included Gale crater,” Weitz said.

In the long term, geologists will someday hope to tie this event to some other Martian features. For example, if a volcanic eruption caused the marker, they will someday hope to link it with a specific volcano and a specific past eruption. And if not a volcano, then they would try to link it to other past events, such as a change in the Martian atmosphere or climate.

Based on the pace of Curiosity’s past travels, the rover will not likely reach the marker for at least a year, no matter what route the scientists eventually choose for it. In the meantime it will poke its way uphill, gathering data on the sulfate layer that sits below the marker, and taking lots of spectacular images along the way.