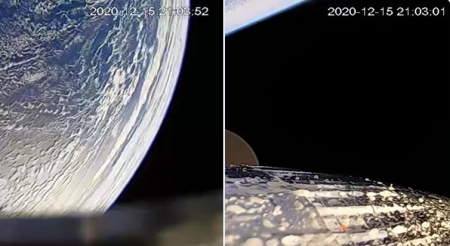 UPDATE: The rocket came up slightly short of orbit. From Eric Berger:

Rocket was 0.5 km/s short of orbit. With a better fuel mixture in the upper stage it would have orbited. Apogee of 390km. Rocket 3.3 will carry a payload, and there will be no hardware or software changes.

Original post:
——————————
Capitalism in space: According to the company’s Twitter feed, the second launch attempt today by Astra of its rocket appears to have reached orbit.

The images to the right were taken by their rocket, which is unimaginatively dubbed Rocket 3.2. I hope they now give this vehicle a more striking name.

If they have succeeded, they will have joined Rocket Lab as one of only two private commercial smallsat startups to launch a rocket to orbit. Two Chinese pseudo-private companies, Galactic Energy and ExSpace, have accomplished this, but I do not count them as real private companies. They might have worked independent of the government and raised investment capital, but nothing they do happens without close government supervision.

We will have to wait for full flight data from the company, but assuming they reached orbit that will be 40th American launch in 2020, the first time the U.S. has topped 40 launches in a single year since 1969, when the country achieved 46 successful orbital launches.