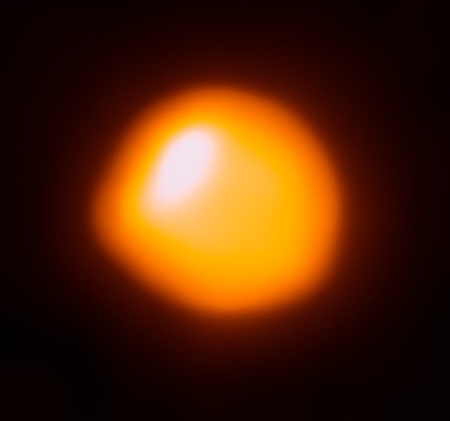 Using ESO’s Very Large Telescope astronomers discovered a vast plume of gas almost as large as our Solar System. Astronomers have also found a gigantic bubble that boils away on Betelgeuse’s surface. These features help to explain how the star is shedding gas and dust at tremendous rates (eso0927, eso1121). In this picture, ALMA observes the hot gas of the lower chromosphere of Betelgeuse at sub-millimeter wavelengths — where localised increased temperatures explain why it is not symmetric.

The image on the right is that image, slightly reduced to post here. The bulge on the star’s left illustrates the unevenness of the star’s upper atmosphere. I suspect that continuous observations would reveal the outer atmosphere waxing and waning almost like the stuff inside a lava lamp.