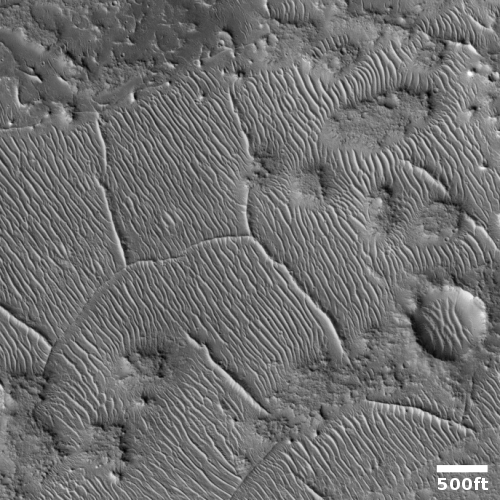 Today’s cool image is one of my “what the heck?” photos. The picture to the right, cropped and reduced to post here and taken on September 3, 2020 by the high resolution camera on Mars Reconnaissance Orbiter (MRO), shows a strange dune field of many parallel long dunes, cross-cut by larger ridges.

Are the larger ridges dunes? Or are they some form of volcanic or tectonic ridge, which is also very typical of this region, called Tempe Terra and located in the transition zone between the southern cratered highlands and the northern lowland plains?

Or are they eskers, ridges frequently found in places that were once covered by glaciers? At 35 degrees north latitude, it would not be surprising to see glacial features here, but as far as I can tell, the full image has no obvious such features.

Based on this paper as well as a quick review of the literature, it appears that scientists tend to favor tectonic or volcanic processes for forming the larger fissures and ridges in Terra Tempe.

However, the ridges in the photograph are relatively tiny compared to the many-mile-wide tectonic wrinkle ridges often found in Terra Tempe. These small ridges are also only found in patches, generally flat low areas filled with dust and dunes. In the full image most of the terrain does not have such small ridges, and is instead covered with a rough eroded plateau interspersed with craters and depressions.

That these small ridges are only found in the flat smooth dust- and dune-filled patches is another puzzle.

Maybe they are dikes, extrusions of lava through cracks. Once again, however, why would these cracks be only found in such distinct patches?

It is unlikely (but not impossible) that these ridges are dunes, since we can see the smaller dunes climbing up their slopes, suggesting the ridges are older and more solid. While they are thus likely older bedrock, such as dikes, they could also be older larger dunes that have since solidified into rock. That the ridges do not align (as dunes would generally do because of the prevailing winds) however argues against a dune origin.

So, what do you think? Guessing by everyone is allowed, though it does pay to do some research and learn some basics about geology first so that your guesses are a bit more than mere hand-waving.

But only a bit more. And always remember, you are guessing, as are the scientists (though with greater knowledge). Until we can walk this ground all our theories about its geology are uncertain, and should not be taken on faith without some skepticism.