Bennu from two miles
May 6, 2019 at 9:02 am Robert Zimmerman Points of Information 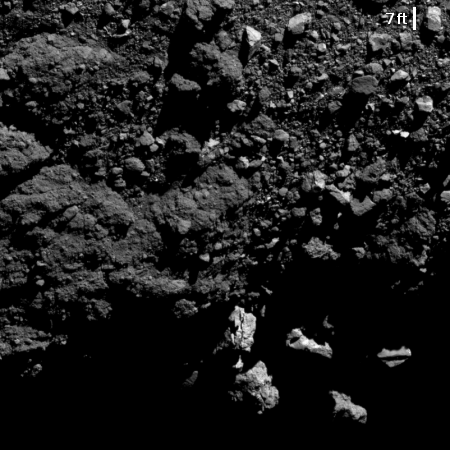 In late March OSIRIS-REx completed its fourth fly-by of the asteroid Bennu. The image on the right, cropped and reduced to post here, was taken when the spacecraft was only 2.1 miles above the surface. If you were standing among these large boulders, we could easily see you.

The image itself shows the asteroid’s southern limb, and thus the shadows are accentuated. This makes it easier to see surface details. Though it is clear once again that Bennu is a pile of boulders and rocks cemented together and floating in space, the photograph also shows that it also has areas where the material is either much larger or fused together more solidly, as shown by the more massive sections in the left center of this picture. We might be looking a very large boulders peeking up from below the surface, or possibly this is the hint of some real bedrock.

The OSIRIS-REx team is continuing the spacecraft’s survey phase, gathering high resolution images in order to compile a detailed map of the surface, prior to planning the touch-and-go sample grab.