Bennu’s equatorial craters
May 11, 2020 at 10:05 am Robert Zimmerman Points of Information 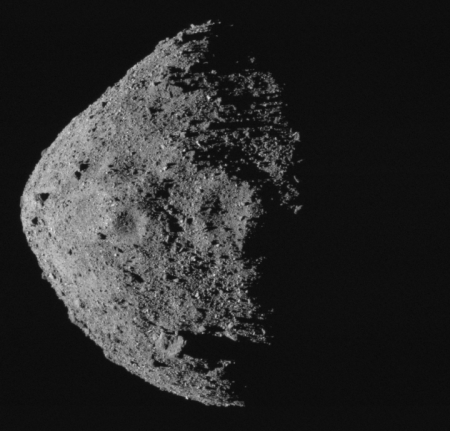 The OSIRIS-REx science team today released a neat image of Bennu, highlighting the string of impact craters along the rubble-pile asteroid’s equatorial ridge. The image to the right, cropped and reduced to post here, shows that image. From the release:

Bennu’s darkest boulder, Gargoyle Saxum , is visible on the equator, near the left limb. On the asteroid’s southern hemisphere, Bennu’s largest boulder, Benben Saxum , casts a long shadow over the surface. The field of view is 0.4 miles (0.7 km). For reference, the largest crater in the center of the image is 257 ft (78 m) wide, which is almost the size of a football field.

The photo was taken from a distance of six miles on April 28. The craters illustrate well the rubble pile/sandbox nature of this asteroid. They all look like what you’d expect if the impact was able to easily drive itself deep into the a pile of sand and loose rocks. The resulting crater thus has a very indistinct rim and a sloping floor down to a central point.