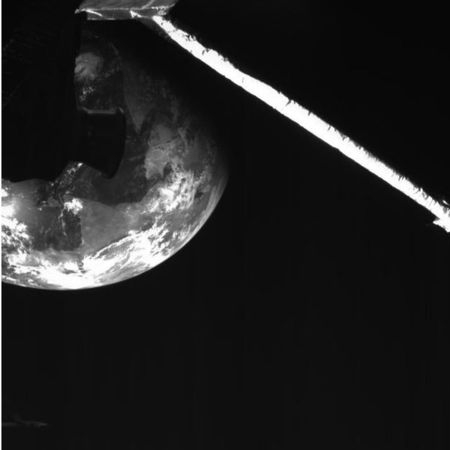 BepiColumbo, the joint European-Japanese mission to Mercury, has successfully completed its fly-by of Earth.

The image to the right is one of the images of Earth it took during the fly-by. The white streak in the upper right is part of the spacecraft.

Mission scientists switched on a number of the duo’s instruments for the Earth pass, to test and calibrate them. Unfortunately, the main camera on Europe’s MPO couldn’t operate because of its position in the stack. But small inspection cameras to the side of Bepi did manage to grab some black & white pictures of the Earth and Moon.

The quote call’s the spacecraft a “duo” because it really is two orbiters presently latched together, the European Mercury Planetary Orbiter (MPO) and the Japanese Mercury Magnetospheric Orbiter (MMO). When it gets to Mercury these will separate.