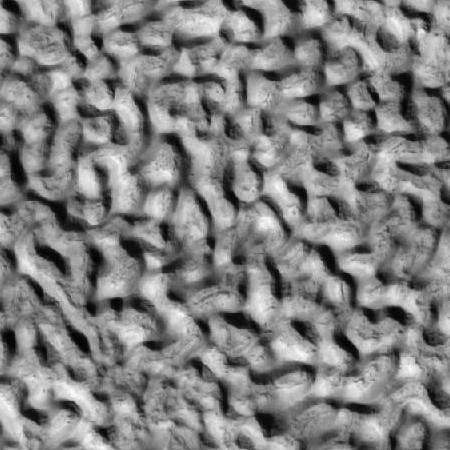 Cool image time! This week the Mars Reconnaissance Orbiter (MRO) science team featured four new captioned images taken by the spacecraft and released as part of the March image dump. The first, dubbed “The Slow Charm of Brain Terrain,” deserves an immediate post on Behind the Black. To the right is only a small section cropped from the full image. From the caption:

You are staring at one of the unsolved mysteries on Mars. This surface texture of interconnected ridges and troughs, referred to as “brain terrain” is found throughout the mid-latitude regions of Mars. (This image is in Protonilus Mensae.)

This bizarrely textured terrain may be directly related to the water-ice that lies beneath the surface. One hypothesis is that when the buried water-ice sublimates (changes from a solid to a gas), it forms the troughs in the ice. The formation of these features might be an active process that is slowly occurring since HiRISE [MRO’s high resolution camera] has yet to detect significant changes in these terrains.

Below is a cropped section of the full image, rotated and reduced to post here. 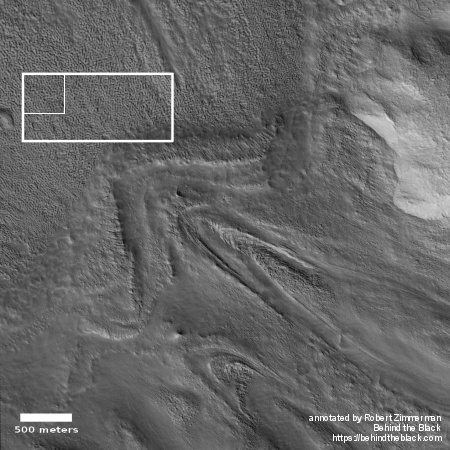 I have indicated by the white box the section of the image they highlight. The smaller box is the area covered by the image posted by me above.

What immediately struck me in looking at the full image is the two flow features to the southeast of this brain terrain. The larger one in the middle of the image clearly looks like it is pushing its way into this brain terrain. The push was so hard that it formed a moraine in that terrain, which is the v-shaped ridge at the head of this flow.. Since MRO has not detected any changes in this terrain in its more than a decade of observations, this process either occurred quite awhile ago and has apparently since become frozen in place, or is occurring very very slowly, so slowly that in a decade we cannot see a change

If the former, the material here had the texture and malleability of mud when it occurred. If the latter, it more resembles glass, in that it is flowing like a liquid, but doing so slowly you can’t see it happen.

The caption above says this strange geological feature is found throughout the mid-latitude regions of Mars, but this is a very vague statement. I would be more interested in the specific geology where all of these features are found. For example, this particular location is in the transition zone between the southern highlands and the northern lowland plains, an area with many shoreline features scattered about. Is brain terrain always found in that transition zone, which is generally in the mid-latitudes? And if so, is its formation related in some way with those shoreline features and the theorized intermittent ocean that some scientists believe once existed in the Martian northern hemisphere?

Posted in the air between Columbus and Las Vegas, on the way home,.