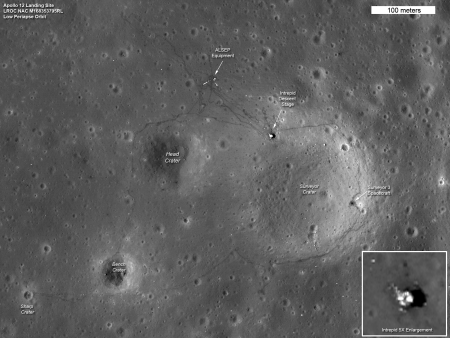 Fifty years ago today Apollo 12 was launched, landing on the Moon several days later to become the second manned mission to land on another world.

To celebrate that achievement, let’s review a few of the mission’s high points. The image to the right, cropped and reduced to post here, shows that landing site, the lunar module Intrepid, the various tracks for the two moon-walks Pete Conrad and Alan Bean took, and the unmanned Surveyor-3 probe. The image was taken by Lunar Reconnaissance Orbiter late in 2011 and released to the public in 2012. To really see some detail you will look at the full resolution version by clicking on the image. Or you can explore the landing even more thoroughly at the original release site.

First, there was Pete Conrad’s point blank landing. They wanted to land close enough to Surveyor 3 so that the two astronauts would be able to walk over to it during a spacewalk. He did this perfectly, bringing Intrepid down only 600 feet away. They were thus able to recover the probe’s scoop, camera, television cable, and other assorted parts. Once back on Earth the big discovery was that a single bacterium, Streptococcus mitis, had survived the journey from Earth and was still alive upon its return. Scientists theorized its survival occurred because prior to launch it had been freeze-dried during prelaunch vacuum tests.

Second, there were Pete Conrads’s first words upon stepping off the lunar module. As the third man to walk on the Moon and also one of the shortest Apollo astronauts, he won a bet with a French reporter, who did not believe he had the freedom to say whatever he wanted as his first words, by saying, “Whoopee! Man, that may have been a small step for Neal, but it’s a long one for me!”

Third, the astronauts installed the second seismometer on the Moon, which functioned for eight years.

Fourth, they brought back 75 pounds of material, which showed that while the Ocean of Storms was a mare lava field like the Sea of Tranquility, it had formed 500 million years more recently.

Fifth and most important, Apollo 12 proved that the Apollo 11 landing was not a fluke, that the engineering behind the Saturn 5 rocket, the Apollo capsule, and the lunar module, was sound. With courage and determination and a little clever re-engineering, those vehicles had been capable of taking humans anyway in the solar system. It is a shame we never took advantage of that possibility.

Hat tip to Mike Nelson for reminding me to post this.