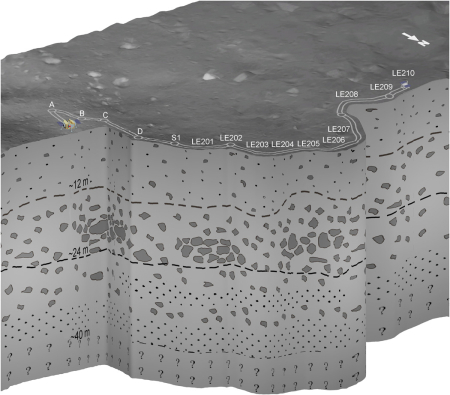 The new colonial movement: Chinese scientists today published their first ground-penetrating radar results from their Chang’e-4 lander on the far side of the Moon.

Using a ground-penetrating radar instrument on Chang’e-4, researchers have found that the rover is likely sitting on different layers of ejecta—debris from multiple impacts over time that rained down at high velocities to blanket the lunar surface and now fill the crater. “[We] see a very clear sequence of [layers],” says Elena Pettinelli of Roma Tre University in Italy, one of the paper’s co-authors.

The rover’s radar instrument was able to penetrate up to 40 meters below the surface of the moon, more than twice the distance achieved by its predecessor, the Chang’e-3 mission, which landed on the lunar near side in December 2013. Data from the latest mission show three distinct layers beneath the rover: one made of lunar regolith, or soil, down to 12 meters; another made of a mix of smaller and larger rocks down to 24 meters; and a third with both coarse and fine materials extending the rest of the 40-meter depth.

The figure to the right comes from the paper [pdf] Though the layers have not been dated, their differences suggest different past events in the formation of this surface.

These results are excellent, but they also have many uncertainties. Radar can tell you a lot, but the only way you can really ever know anything about what’s below ground is to go there and actually do some digging.