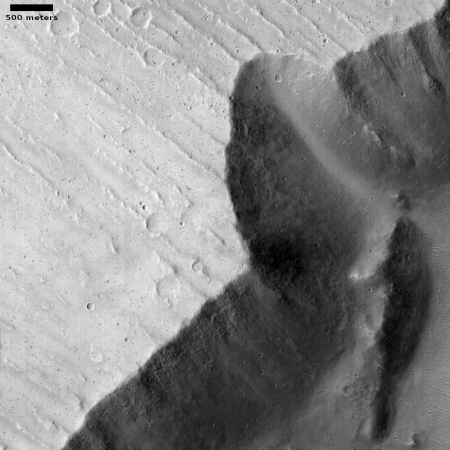 Cool image time! The photograph to the left, rotated, cropped, and reduced to post here, was found in the August image release of the high resolution camera on Mars Reconnaissance Orbiter (MRO).

This was an uncaptioned image, with a title “Cataract and Grooves in Kasei Valles.” Kasei Valles is the giant canyon north of Marineris Valles. Though it is not as well known or maybe as dramatic, it is about as long and vast as its more famous southern canyon. It also has some very intriguing features, including what I consider to so far be the pit on Mars with the highest priority for exploration.

The image on the right shows the result when a giant section of this cliff face broke off and collapsed into the canyon. It also shows that the collapse occurred a long time ago. Not only are there newer craters on the collapse debris, the breakdown at the cliff base looks well eroded, as if many eons have passed since it piled up there.

When this section broke off however it was a very big event. The width of the collapse is about a mile across, with its depth about 600 feet. The height of the cliff is approximately 3000 feet, give or take a few hundred feet. Thus the chunk that broke off was about 600 feet wide, 5,000 feet long, and about 3,000 feet high. That’s one very big rock.