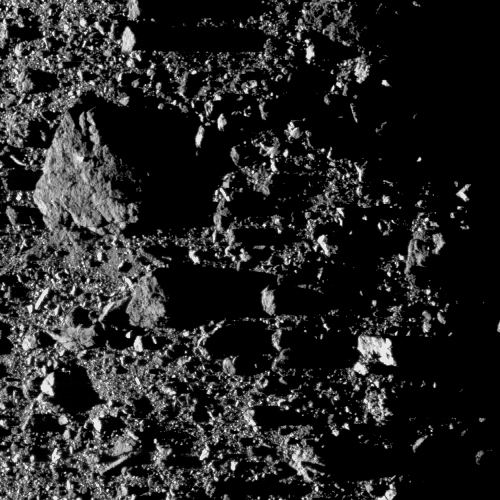 The OSIRIS-REx science team has released a very high resolution image taken of Bennu’s north pole region. To the right is the most interesting part of that image, cropped by me to show here.

This image shows a region near asteroid Bennu’s north pole on the terminator line between the asteroid’s day and night sides. The OSIRIS-REx spacecraft’s MapCam camera obtained the image on Feb. 20 while in orbit around the asteroid from a distance of 1.1 miles (1.8 km). At this distance, each pixel covers approximately 4.5 inches (12 cm) of Bennu’s surface. The largest boulder, located slightly left of the center, measures around 52 feet (16 meters) across, which, for scale, is the length of the trailer on a semi-truck.

In other words, if this was a truck stop along an interstate highway, you could see the driver getting out of that semi to head inside for dinner.

The spacecraft right now is not doing much science work. They are in what they call the Orbital A phase of the mission, where they are in a very low orbit along the terminator line between night and day — generally a mile above the surface — and are using this orbit to give the engineering team practice maneuvering at such an orbit while they transition from using the stars to navigate to using landmarks on the surface.