Cloud stream on Jupiter
December 6, 2019 at 9:21 am Robert Zimmerman Points of Information 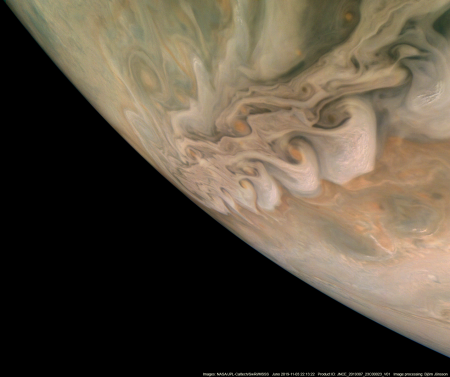 Cool image time! The photo to the right, taken by Juno on November 3, was enhanced by citizen scientist Björn Jónsson to bring out the colors. It shows a band of repeating large storms, with tiny white thunderheads popping up within them.

The dark areas at the edges of the swirls are likely not an aspect of the clouds but shadows created because the white swirls sit higher than the surrounding gases.

Sadly the press release does not give us a scale. The image was taken from a distance of 3,200 miles. I suspect each cloud swirl would likely cover much of the Earth.