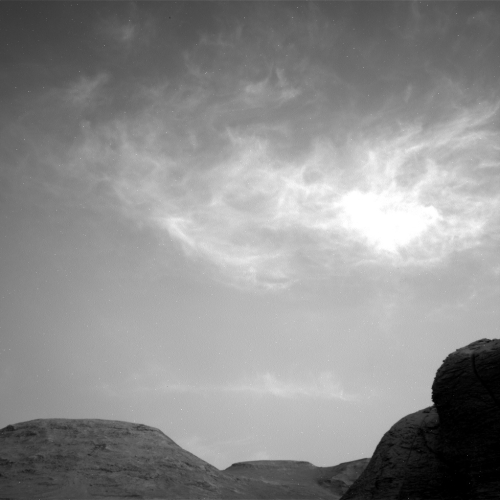 Cool image time! In today’s download of new images from Curiosity was a large number looking at the sky. by one of the rover’s navigation cameras. As noted in the science team’s most recent update, their aim was to “watch for clouds in the sky at twilight.”

They were apparently very successful. The picture to the right, reduced to post here, is one example. The other pictures show these clouds and other clouds as they change over time.

I don’t have much more to add, other than to say it is quite breath-taking to be able to sit here on Earth and routinely gaze at the weather on Mars.

UPDATE: I do have one more thing to say. If you have any skills at programming and want to figure out how to process the raw images from Curiosity and Perseverance to bring out their color, you might find the video at this link of interest: How Can You Color Process Mars Rover’s Images In DaVinci Resolve?

I am not a computer programming geek, so some of its details went over my head. Nonetheless, it opened a window into the photo-engineering used to turn the rovers’ black-and-white digital data into color.

Hat tip to Patrick Inhofer, who calls himself the photon wrangler at MixingLight.com.