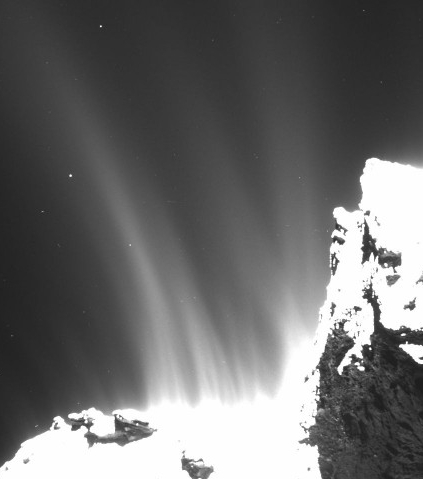 The science team running Rosetta has released an image (cropped by me on the right) from the probe’s high resolution camera showing the fine structure of Comet 67P/C-G’s plumes.

I call them plumes rather than jets, which is the word the scientists use as well as everyone else, because it appears to me that they really aren’t jets, tightly confined flows of material coming from a nozzle-like opening. Instead, the image makes me think of very fast-rising plumes of smoke rising from an extinguished fire.

This image was taken in November, and is one of only a very tiny handful of images released from the high resolution camera. Rosetta’s science team has been very possessive of images from this camera, holding them back for their own research papers to follow in the future. Even here, the image is not very detailed. I wonder what cool stuff this camera has snapped close in that they have not yet shown us.