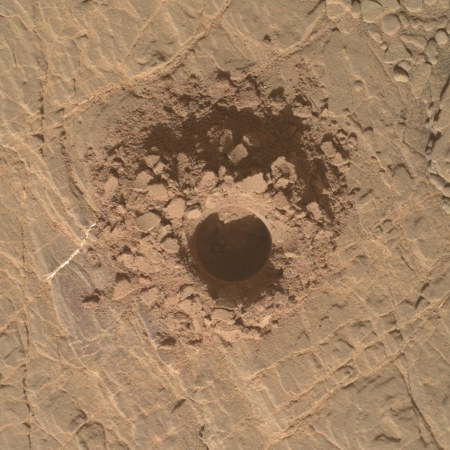 With Mars moving out from behind the Sun yesterday, the Curiosity science team has successfully reestablished communications with the rover.

The focus of Curiosity’s activities since returning to operations after conjunction, now that Mars has safely moved out from behind the sun, is to finish up the analyses associated with the drilling campaign at “Glen Etive 1.”

The image to the right, cropped and reduced to post here, was among the first images downloaded from the rover once communications were reestablished. It was taken by a camera at the end of the robot arm that the scientists had positioned above the hole in order to get a close-up.

Before continuing up the mountain they now plan a second drill hole close-by, to better constrain the data at this location obtained from this first hole.