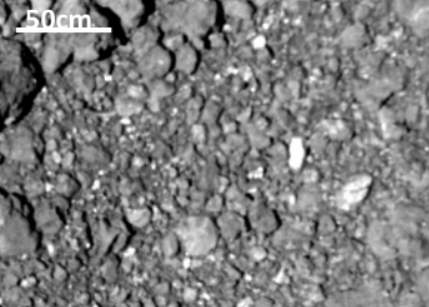 At a special session today dedicated to results from the Hayabusa-2 probe to the asteroid Ryugu at the 50th Lunar and Planetary Science Conference in Texas, scientists confirmed from numerous data and images that the asteroid has a low density, is covered with boulders and pebbles, is very porous, and is thus a rubble pile that is held together by gravity, barely.

From their lead presentation [pdf]:

The estimated total porosity is even higher than that of rubble-pile asteroid Itokawa (44 ± 4%), indicating that asteroid Ryugu is also a rubble pile. This is consistent with a theory arguing that all Solar System bodies with diameter of ~1 km should be rubble piles and might have formed from reaccumulation of fragments generated by catastrophic disruption events of ~100-km sized parent bodies.

They also posit that the asteroid’s diamond shape is caused by the asteroid’s 3.5 hour rotation, which causes its weak rubble pile structure to be easily pulled to the equator, and then outward.

Another paper [pdf] did crater counts, and found that there are fewer large craters than one would expect.

The density of large craters (D>100 m) on Ryugu is lower than the empirical saturation level and its slope is steeper than that of the saturated distribution, suggesting that craters larger than 100 m are not saturated and the size distribution reflects the crater production function. However, craters smaller than 100 m are significantly under-saturated, suggesting that some crater erasure processes such as seismic shaking and armoring effect are active on the Ryugu surface. Based on cratering chronology model for the main belt, the surface age of Ryugu is estimated to be 5–200 [million years] from the size–frequency distribution of craters larger than 100 m.

In other words, this rubble pile is constantly being shaken by its rotation and time and later impacts, which steadily rewrites the surface.

If this asteroid was headed to Earth, I imagine the only safe solution to prevent disaster would be to slowly and gently deflect it so it only flies past. To do this will require an arrival far in advance of the schedule impact, to give time for the deflection process to work.