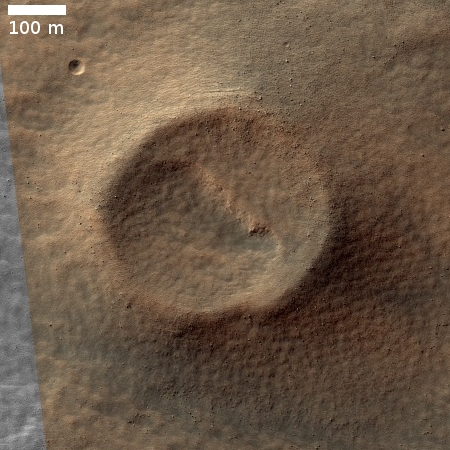 Cool image time! The photograph on the right, cropped to post here, was taken by the high resolution camera of Mars Reconnaissance Orbiter (MRO) on April 16, 2019 of the slope of a mountain inside a region dubbed Eridania that is part of the planet’s southern highlands.

The photograph, released as part of the June image release from MRO, came with no caption. Furthermore, the image title, “Eridania Mons,” provided no additional information, which is why I clicked on it. The vagueness of the title made me curious.

The full image shows a generally featureless plain. Near the image’s bottom however was the geological feature shown in the cropped section to the right. At first glance one thinks it is a crater. This first impression can’t be the entire story, because the feature is raised above the surrounding terrain, and in that sense is more like a small volcano with a caldera. The irregular pit inside the caldera kind of confirms this conclusion.

I would not bet much money on this conclusion. The overall terrain of the Eridania quadrangle is filled with craters, large and small. There does not seem to be any obvious evidence of past volcanic activity, and if there had been it has not expressed itself in large volcanoes.

However, other images of this mountain show many circular features that at first glance appear to be craters like the featured image. They appear slightly raised above the surrounding terrain, though not in as pronounced a manner.

They all could be small volcanoes. Or maybe they are impacts that hit a dense surface which prevented them from drilling too deep down, and instead caused the crater to be raised above the surrounding terrain.

‘Tis a puzzle. The irregular pit in this particular feature adds to the mystery. It does not look like the kind of pits one sees in calderas. Instead, its rough edge suggests wind erosion.