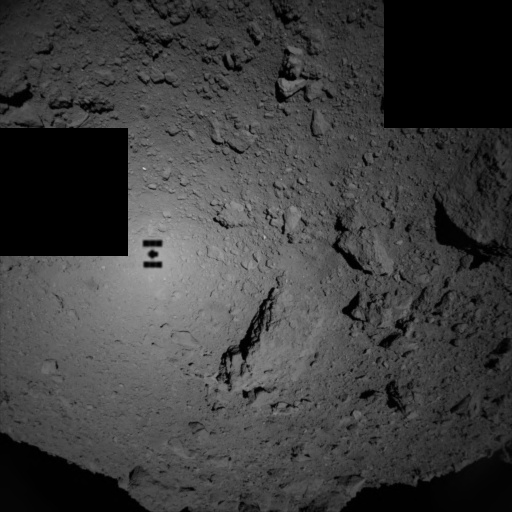 Cool images! As Hayabusu-2 creeps to its closest approach to Ryugu in preparation to releasing its first two mini-landers, dubbed MINERVA-II-1 and 2, the images coming down about once every half hour show the asteroid increasingly closer, with the spectacular shadow of Hayabusa-2 with its solar panels clearly visible.

The image on the right was downloaded about 10 pm (Pacific) tonight. The boulder-strewn field of Ryugu is also clearly visible. The black areas are where data has not yet been downloaded. The bright area under the shadow is merely an optical illusion.

UPDATE: A look at this webpage provides some details. When this image was taken the spacecraft was about 100 meters above the surface, its closest approach yet. This was also when the MINERVA-II landers were to be deployed.

All later images at the first link above were from a greater distance.

UPDATE: I have corrected the post. They released both MINERVA-II rovers, and they did it about 100 meters distance from the asteroid, not 60. We will not know the mini-landers’ status until late today.