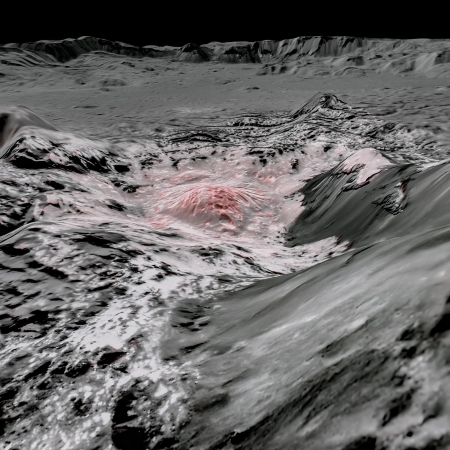 According to a new detailed analysis of data from the Dawn mission, scientists are now postulating that cryovolcanism in Occator Crater on Ceres began immediately after impact about 22 million years ago and has continued in fits and starts since.

Occator Crater was formed about 22 million years ago by a large impact. As in many other impact craters on Earth and on other planets, a central peak was formed, which collapsed again after some time. About 7.5 million years ago, brine rose to the surface within the remnants of the central peak. The water evaporated and certain salts, so-called carbonates, remained. They are responsible for the prominent bright deposits we see today, called Cerealia Facula, in the center of Occator Crater. Due to the loss of material in the interior, the inner part of the crater subsided. A round depression with a diameter of about 15 kilometers formed.

In the following millions of years, activity concentrated mainly on the eastern part of the crater floor. Through cracks and furrows, brine also rose to the surface there and produced further bright deposits, the Vinalia Faculae. About 2 million years ago the center of the crater woke up again: brine rose to the surface and within the central depression a dome of bright material was formed. “This process continued up to a million years ago and maybe even until today,” Dr. Nico Schmedemann from the University of Münster summarizes.

This hypothesis is further supported by second paper that proposes there remains a reservoir of salty underground liquid water in the tiny planet’s interior. Both add weight to the idea that any object in space that is large enough for gravity to force it into a spherical shape is going to behave like a planet, with a complex and active geology.

The first paper has a lot of uncertainty, however, centering entirely on its dependence on crater counts to determine age. While providing a rough age estimate, the method depends on many assumptions, is indirect, and could easily be entirely wrong.