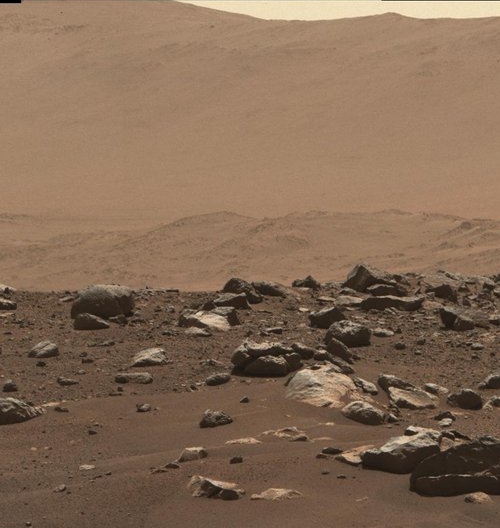 Though the present excitement over the spectacular images and sounds coming down from Perseverance is certainly warranted, what must be understood is that this rover is presently only at the beginning of its journey, and is thus sitting on relatively boring terrain, from a merely visual perspective. The scientists might be excited, but to the general public, all we really are seeing is a flat dusty desert with some scattered rocks on the floor. In the far distance can be seen some hills and mountains (Jezero Crater’s rim), but they are very far away.

Curiosity, which the press and the public has largely forgotten about, is actually just beginning what will likely be the most breath-taking part of its journey. As I noted in my last rover update last week, Curiosity is now at the very base of Mount Sharp, and is about to enter the mountain’s canyons and initial slopes. For its past eight-plus years of roving it has been on the flat floor of Gale Crater, followed by some weaving among the smallest foothills of Mount Sharp. The views have been intriguing and exciting from a research perspective, but hardly breath-taking from a picture-taking point of view.

That is now changing. The picture below, taken by Curiosity just this week, gives us a taste of what is to come. 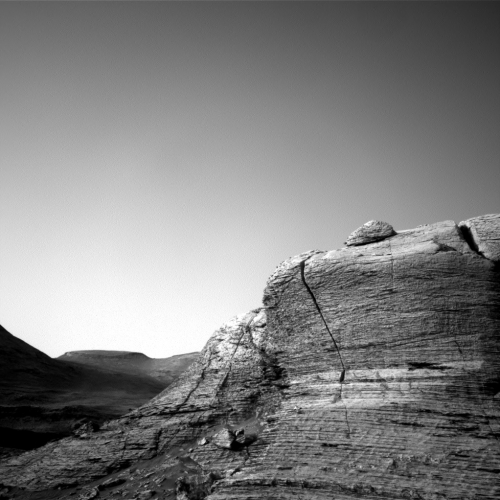 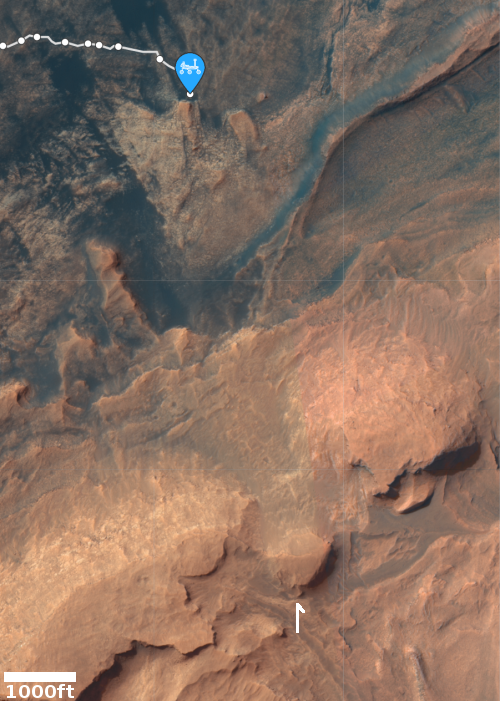 The photo to the right, reduced to post here, shows a close-up of a small cliff, the base of which Curiosity presently sits. The rover is about to drill at this cliff’s base, getting its first samples of Mt. Sharp’s next geological layer, dubbed the sulfate unit. The rover is also taking a close look at the boulder perched at the top of that cliff to see if it is made up of the same material as the cliff itself. The answer to that question will help explain how that boulder got there.

The cliff face itself gives us a hint at utter complexity of the geological history that created Mount Sharp. Look at all the layers. Every single one of them represents a different climatic or geological event. They might represent single years, or eons of time. We don’t yet know.

The point is that as the rover works its way into the mountains beyond, we are likely to see a similar complexity on all cliff faces. Contemplate that for a moment as you look at the overview map to the right. The arrow points to the same distant butte seen on the horizon in the above photo, a little over a mile away. Curiosity is about to start its journey among similar buttes to the west, all of which will likely be as complex geologically as this small cliff in the foreground.

Understanding the past geological history of Mars will require disentangling the meaning of every single one of those layers. And we must expect similar geology across the entire planet.

There is a lot of exploring on Mars yet to do. Right now the rovers are having all the fun. Someday humans will have that chance.