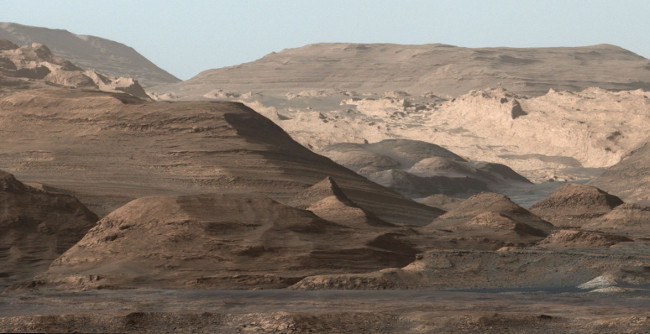 Cool image time! The Curiosity science team has produced another panorama of Mount Sharp and the regions that the rover will soon traverse.

This composite image looking toward the higher regions of Mount Sharp was taken on September 9, 2015, by NASA’s Curiosity rover. In the foreground — about 2 miles (3 kilometers) from the rover — is a long ridge teeming with hematite, an iron oxide. Just beyond is an undulating plain rich in clay minerals. And just beyond that are a multitude of rounded buttes, all high in sulfate minerals. The changing mineralogy in these layers of Mount Sharp suggests a changing environment in early Mars, though all involve exposure to water billions of years ago. The Curiosity team hopes to be able to explore these diverse areas in the months and years ahead. Further back in the image are striking, light-toned cliffs in rock that may have formed in drier times and now is heavily eroded by winds.

They have adjusted the colors, adding blue, so that things look as they would on Earth, in order to help the geologists understand what they are looking at.

Be sure and click on the link. The full resolution image is quite amazing. Like mountains on Earth, from a distance things look a lot simpler than they do once you get there. The slopes of Mount Sharp are complex and rugged, and will be a big challenge for Curiosity to traverse.

Moreover, this rough terrain illustrates that the Martian surface has, like Earth, been significantly shaped by erosion. The surface we see here is not the surface produced by the impact that produced the crater. It has been reshaped and eroded over many eons by many later processes, including wind and water.