Dantu Crater on Ceres
January 21, 2016 at 11:30 am Robert Zimmerman Points of Information 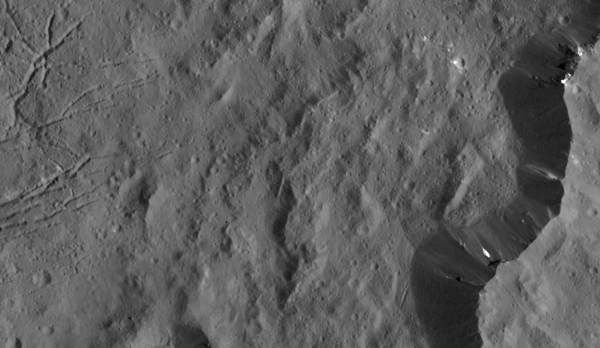 Cool image time! As Dawn continues its close survey of Ceres, the science team has released this image of Dantu Crater, showing the bright spots on its rim as well as fractures on the crater floor. The picture was taken in December and has a resolution of about 120 feet per pixel.

Though scientists now favor salt deposits of some kind as the cause of the bright areas on Ceres, they also recognize that this theory is not yet proven. Moreover, the theory suggests that the salt was deposited as part of a water brine. When the water in the brine evaporated away, it left the salt behind. The problem, however, is that we do not yet have direct evidence that there is any water on Ceres at all, either on the surface or in the interior, which makes this theory exceedingly uncertain.