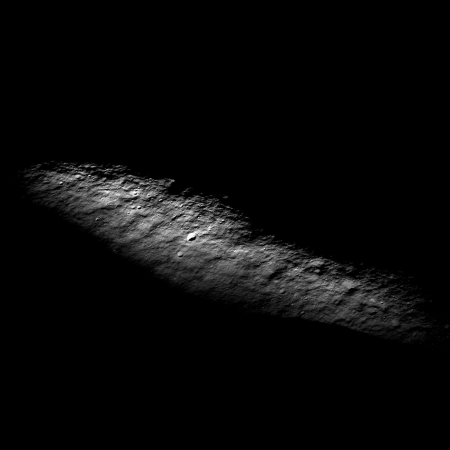 When dawn comes to the airless rough terrain of the Moon’s poles, it comes in fits and spurts. The floors of some craters never see it, while the high crater rims might have only a short time in darkness, their elevation high enough to keep the Sun above the horizon almost continuously. While there appear to be no places at the poles that have eternal daylight, there are places where night is short and infrequent.

The cool image to the right, cropped and reduced to post here, shows one such place close to the Moon’s north pole, the rim of Aepinus Crater. Taken by Lunar Reconnaissance Orbiter (LRO) on March 10, 2020, the illuminated area on this oblique image is about one by four miles in size. With dawn approaching this rim sees the Sun before the rest of the polar region, and remains illuminated long after the surrounding region has returned to darkness.

To get an idea of how small this one illuminated area is, below is a panorama showing the wide region around the rim. 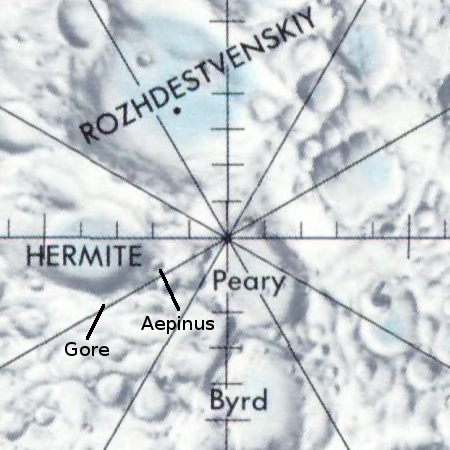 The map to the right gives the location context of Aepinus Crater. In the panorama above, the pole is somewhere near the lower right corner. The crater itself sits between Hermite and Peary craters, both of which have shown evidence suggesting the presence of water ice in their permanently shadowed regions.

Thus, this rim on Aepinus Crater is prime real estate on the Moon. It will have extended periods of light, even during the lunar night, providing access to solar power energy. And it is likely close to those permanently shadowed crater floors, where ice is suspected to exist.

It is now dawn there. It is also one of the places where the dawn of the human settlement of the solar system will begin. Who will be first to land and take possession of this territory?