Dust devil tracks on the Martian southern highlands
January 3, 2019 at 11:49 am Robert Zimmerman Points of Information 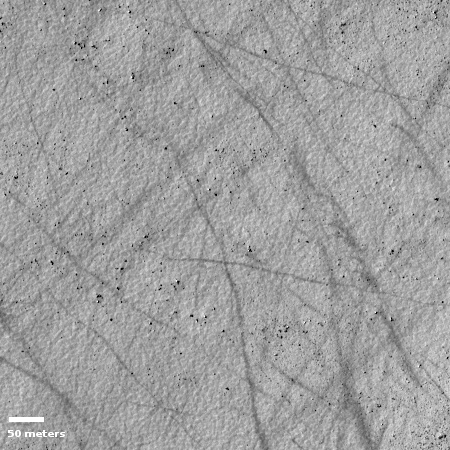 Today’s cool image is cool because of how little is there. The image to the right, cropped to post here, was part of the December image release from the high resolution camera on Mars Reconnaissance Orbiter (MRO). The uncaptioned release labeled this image simply as “Southern Intercrater Plains.” Located in the Martian southern highlands, this location is located almost due south of Arsia Mons, the southernmost in the chain of three giant volcanoes to the west of Marineris Valles (as indicated by the white dot on the overview image below).

If you click on the image you can see the entire photograph, though in this case it won’t show you much else than in the excerpt to the right. The terrain here appears flat. The only features of note are some small knobs and the random dark lines that are almost certainly accumulated dust devil tracks. There are also many dark spots, which might also be the shadows of even smaller knobs, but could also be instrument artifacts. I am not sure. 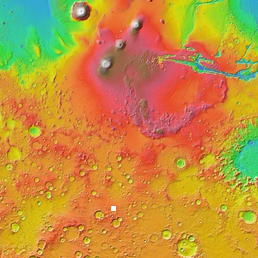 The southern highlands are mostly cratered, with few signs that water ever flowed there. This image for example gives the impression of a vast lonely terrain that has changed little since the very earliest days of Mars’ history.

I expect that scientists could possibly assign some age to this terrain, merely by studying the dust devil tracks. If we calculate how often dust devils might traverse this place, and then count the tracks, assigning their order by faintness, with the faintest being the oldest, it could be possible to obtain a rough age of the oldest tracks.

Still, all that would do would tell us the approximate length of time in which a dust devil track can remain visible. And even if this is a long time, it doesn’t constrain the age of the surface very much, as the weather on Mars has certainly changed with time, especially because we think the atmosphere was once thicker.

What formed this flat terrain? My first guess would be a lava flow, caused when the numerous nearby craters were formed by impact. These craters were likely created during the great bombardment between 3 and 4 billion years ago, and while they have certainly been modified more than lunar craters because of the presence of an atmosphere on Mars, they are likely to have not changed much during that time. Similarly, this flat terrain is likely much like it was, several billion years ago. Dust devils have deposited dust and their tracks, but the hard bedrock remains as it was soon after it solidified.