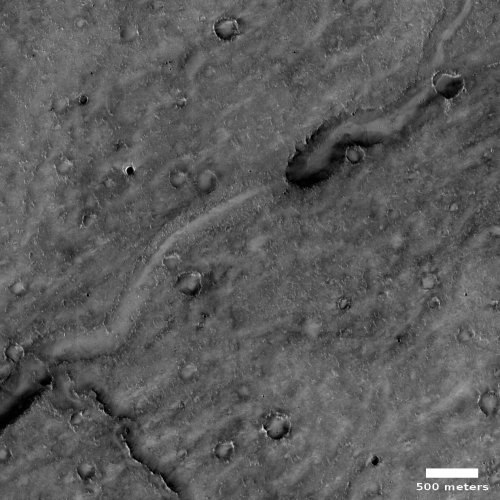 Cool image time. The photo to the right, rotated, cropped, and reduced to post here, was taken on October 26, 2020 by the high resolution camera on Mars Reconnaissance Orbiter (MRO) and labeled by the science team as simply an “Enigmatic Channel in Syrtis Major.”

It shows a channel going downhill to the northeast east in a series of steps, separated cliffs that in the southwest hikers call pour-offs, with the channel becoming initially deeper and then slowly becoming more shallow, until the next pour-off. On Earth the pour-offs would be waterfalls, with a deep pond at the base. On Mars?

Without doubt this channel poses mysteries, but maybe with a little research we can make it less enigmatic. Asl always, the overview map below gives context, and helps give a possible explanation for what created this channel. 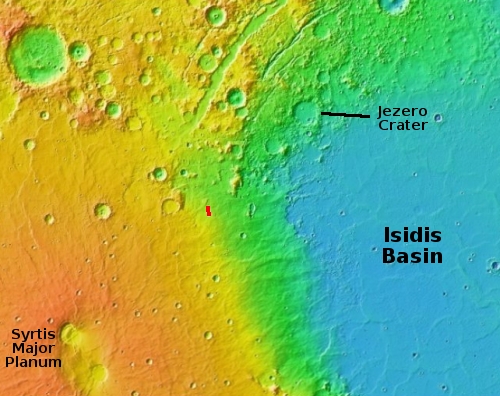 The red box marks the channel’s location, on the edge of the giant lava field formed by the shield volcano Syrtis Major Planum, one of Mars least dramatic looking shield volcanoes which ironically was the first documented surface feature identified on another planet, discovered by Christiaan Huygens during his observations of Mars in 1659.

This shield volcano is thought to have been active about 3 billion years ago, give or take a half billion. The impact that created Isidis Basin to the east took place afterward.

This channel therefore probably marks lava flows from that ancient volcano, though we must recognize the large uncertainty here.

A side note: Tomorrow the American rover Perseverance will attempt its landing in Jezero Crater, only 400 miles to the northeast.