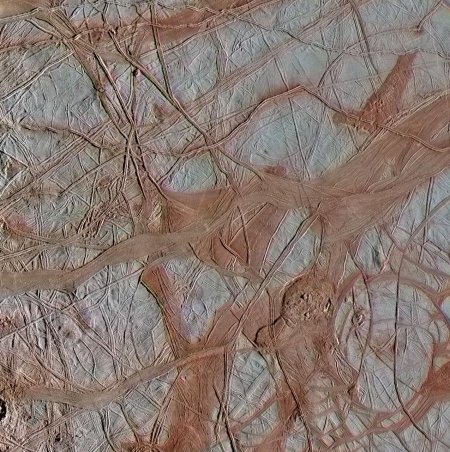 From 1995 to 2003 the Galileo orbiter circled Jupiter 34 times. During those orbits the spacecraft made numerous close fly-bys of Jupiter’s moons, including eleven past the tantalizingly mysterious moon Europa.

The image to the right was taken during the eighth fly-by of Europa. It is one of three Galileo images of Europa that scientists have pulled from the Galileo archive and subjected to modern computer processing in order to improve what can be seen. The other two can be found here and here. From the release for the image to the right:

All three images were captured along the same longitude of Europa as Galileo flew by on Sept. 26, 1998, in the spacecraft’s 17th orbit of Jupiter (orbit E17). It was the eighth of Galileo’s 11 targeted flybys of Europa. High-resolution images were taken through a clear filter in grayscale (black and white). Using lower-resolution, color images of the same region from a different flyby (orbit E14), technicians recently mapped color onto the higher-resolution images.

In other words, they laid the colors from a lower resolution color image on top of the high resolution black & white image so that we could see these three images in color. The blue and white areas are made of up water ice, while the reddish areas are made up of “more non-ice materials.”

The vagueness for describing the non-ice materials is intentional, as scientists still do not know what they made of. They do believe that this material came from the planet’s interior, as the red material is always found aligned with the cracks, fissures, and grooves, as illustrated clear by this image.

What has always struck me about this surface of Europa since I first saw similar Galileo images back in 1998 and wrote about them for the magazine The Sciences is how much it resembles the Arctic ice pack as seen by early explorers during their attempts to reach the North Pole, jumbled jigsaw pieces of ice packed together but moving slowly so that the cracks between them shift and change over time.

The resemblance adds weight to the theory that there is a liquid ocean below Europa’s icepack, and the red material hints at some intriguing chemistry coming from that ocean.