First image of possible asteroid in orbit around the Earth
February 27, 2020 at 3:37 pm Robert Zimmerman Points of Information 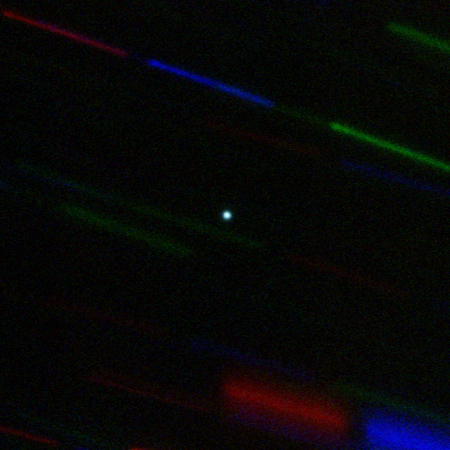 The Gemini telescope in Hawaii has produced the first image of what might be only the second asteroid ever discovered in orbit around the Earth.

The newly discovered orbiting object has been assigned the provisional designation 2020 CD3 by the International Astronomical Union’s Minor Planet Center. If it is natural in origin, such as an asteroid, then it is only the second known rocky satellite of the Earth ever discovered in space other than the Moon. The other body, discovered in 2006, has since been ejected out of Earth orbit. 2020 CD3 was discovered on the night of 15 February 2020 by Kacper Wierzchos and Teddy Pruyne at the Catalina Sky Survey operating out of the University of Arizona’s Lunar and Planetary Laboratory in Tucson, Arizona.

The photo to the right has been cropped to post here. The streaks are stars, since the telescope was tracking the asteroid in an attempt to cull the most resolution of it from the image.

This object is only a few yards across, and could very well be a piece of space junk from a mission launched many decades ago. It is also not in a stable orbit around the Earth, and is expected to be ejected from that orbit in April.