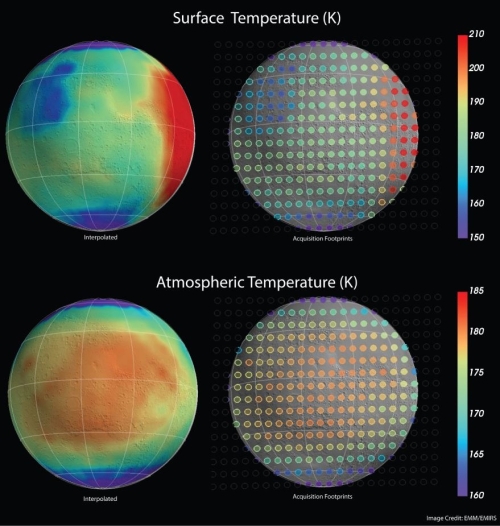 The first science results from the United Arab Emirates Al-Amal Mars orbiter (“Hope” in English) have been released by the American universities operating one instrument.

The image to the right shows that data. The right globes show the areas of actual temperature data for both the Martian surface and atmosphere, with the left globes extrapolating that data across the entire planet.

“EMIRS [the infrared spectrometer] is going to acquire about 60 more images like this per week once we transition into the primary science phase of the Emirates Mars Mission,” said EMIRS Instrument Scientist Christopher Edwards, who is an assistant professor and planetary scientist at [Northern Arizona University]. “We’ll use these images and sophisticated computer programs to build up a complete global, daily understanding of the Martian atmospheric components, like dust, water ice, water vapor and atmospheric temperature.” [emphasis mine]

The highlighted words above illustrate the true nature of this U.S./UAE joint mission. Right now the spacecraft is being operated by Emirate engineers in the UAE, but the spacecraft and its instruments were really built by U.S. universities, paid for by the UAE. As such, those American universities remain in charge of running those instruments, though UAE students are also being used to do that work as part of their education.

That deal however once again illustrates the value of private enterprise and freedom. The UAE wanted to teach its people how to fly a planetary space mission. American universities had the knowledge to do it. The former then bought the skills from the latter, while the latter then got a science mission for free.

A match made in heaven with both benefiting marvelously.