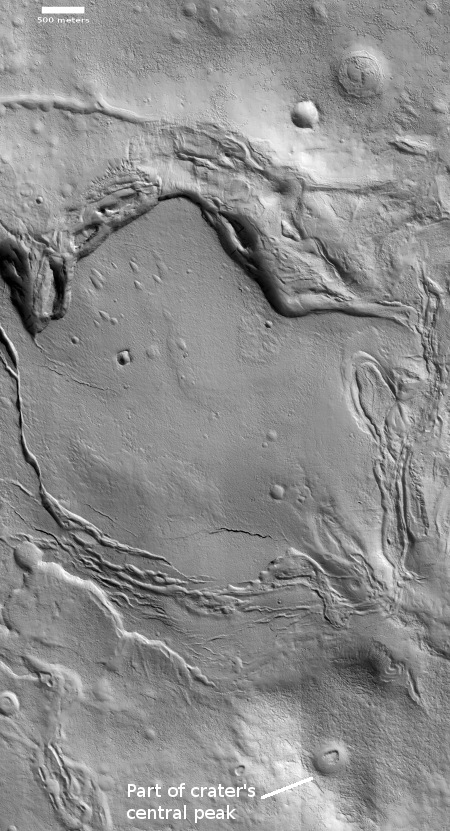 Cool image time! The image on the right, rotated, cropped, and reduced to post here, comes from the December image release of the high resolution camera of Mars Reconnaissance Orbiter (MRO. Uncaptioned, the release titles this image “Cracks in Crater Deposit in Acheron Fossae.” If you click on the image you can see the entire photograph at full resolution.

Clearly the cracks appear to be caused by a downward slumping to the north, almost like a glacier made of mud. We can also see places on the image’s right edge where the mud appears to have flowed off a north-south trending ridge, then flowed downhill to the north. All of this flow is away from the crater’s central peak, which is only partly seen in the photograph near the bottom. That section is the central peak’s southwestern end, with the whole peak a ridge curving to the northeast beyond the edge of the image.

At the north edge of this mud flow the cracks become wider canyons, as if long term erosion is slowing washing the mud away. The flow then stair steps downward in a series of parallel benches. Meanwhile, in the flat central area of the mud flow above can be seen oblong depressions suggesting sinks that also flow to the north. 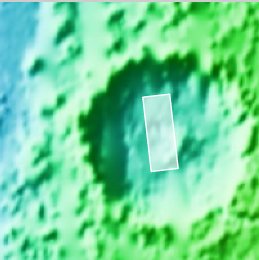 You can get a better idea of the crater’s overall floor and central peak by the low resolution context image to the right. The white rectangular box indicates the area covered by the full image above. A close look at this part of the crater floor suggests to me a circular feature like a faint eroded smaller crater that includes as its eastern rim the larger crater’s central peak. This impression suggests that the flows seen in the full resolution image are heading downhill into the lowest point of this smaller crater, that upon impact had reshaped the larger crater’s floor.

This impression however is far from conclusive. The features in the large crater could simply be the random geology that often occurs in the floors of impact craters.

What makes this particular mud slide most interesting, as is usually the case for most Martian terrain, is its location. 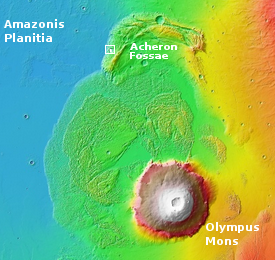 On the overview map on the right the white box near the top in Acheron Fossae shows the location of the previous context image. It also reveals that this crater is right on the edge of the transition zone between the low northern plains and the southern highlands. It is also located north of Mars’ largest volcano, Olympus Mons, and appears to also be at the very edge of the volcano’s northern flow apron.

Putting these pieces together suggests a geological history that combines the intermittent oceans of the northern plains, the volcanic heat coming from Olympus Mons, and the instantaneous impact of large meteorites. As is seen often in this transition zone, the features here are reminiscent of a tidal beach, where advancing and then receding water deposits mud and then erodes it away. Because of the lava flows coming down from Olympus Mons, however, this part of the transition zone generally sits at a higher elevation with a sharp precipitous drop down to the lower northern plains. The impact that formed this crater however drilled out a hole in this higher transition zone, where in wetter times water could be trapped. To my eye, this is part of the reason this crater seems to have these tidal beach features. As the intermittent ocean slowly drained away into the northern plains, water also pooled in this crater. During the time it was evaporating away it left behind a surface material that for a time was saturated with water, just like mud. That mud could then flow as we see it.

Eventually the water was mostly gone, and the mud hardened into a solid material that changes little, except for wind erosion and slow collapse.

The main question from an exploration perspective is whether any of that water remains, below ground. The oblong sinks suggest underground voids that might hold ice. Unfortunately, I don’t think we we can find out for sure until we send a probe to this exact spot.