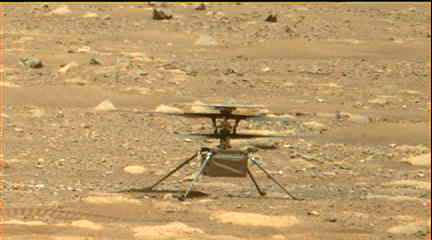 Even as the Ingenuity engineering team will attempt a fourth flight of Ingenuity, JPL announced today that they and NASA have decided to now shift to operational flights, attempting to duplicate the kind of scouting missions that such helicopters will do on future rovers.

The second link takes you to the live stream of the press conference. The press release is here.

Essentially, they will send Ingenuity on a series of scouting missions after this fourth flight, extending its 30 day test program another 30 days. Its engineers will be working with the Perseverance science team to go where those scientists want to send it. After the fourth and fifth test flights they will fly Ingenuity only periodically, separated by weeks, and send it to scout places Perseverance can’t reach, and have it land at new sites that Perseverance scouted out as it travels.

They have decided to do this because they want to spend more time in this area on the floor of Jezero Crater, for several reasons. First, they are still testing the rover to get it to full working operations. Second, they want to obtain some samples for future pickup at this location. Third, they want to spend an extensive amount of time exploring the floor up to a mile south of their present location.

Finally, the relatively flat terrain is perfect for testing and actually using the helicopter as a scout.

Though the extension is for 30 days, and though the helicopter was not built for long term survival, there is no reason it cannot continue indefinitely until something finally breaks.

Right now they are awaiting the data from the fourth flight, which will arrive at 1:39 pm (Eastern) and will be used to determine what the fifth flight will do, probably a week from now.