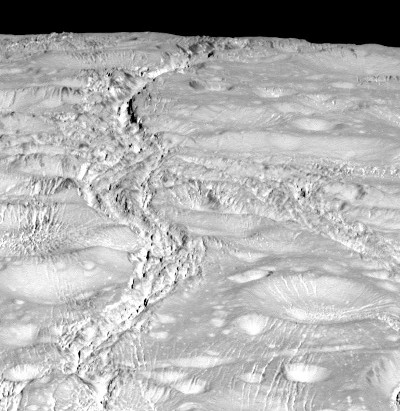 The Cassini science team has released the first image from Wednesday’s flyby of the Saturn moon Enceladus.

Scientists expected the north polar region of Enceladus to be heavily cratered, based on low-resolution images from the Voyager mission, but the new high-resolution Cassini images show a landscape of stark contrasts. “The northern regions are crisscrossed by a spidery network of gossamer-thin cracks that slice through the craters,” said Paul Helfenstein, a member of the Cassini imaging team at Cornell University, Ithaca, New York. “These thin cracks are ubiquitous on Enceladus, and now we see that they extend across the northern terrains as well.”

To see more you can browse the raw images here.

The next flyby later this month will be especially interesting as they will dip to within 30 miles of the surface.