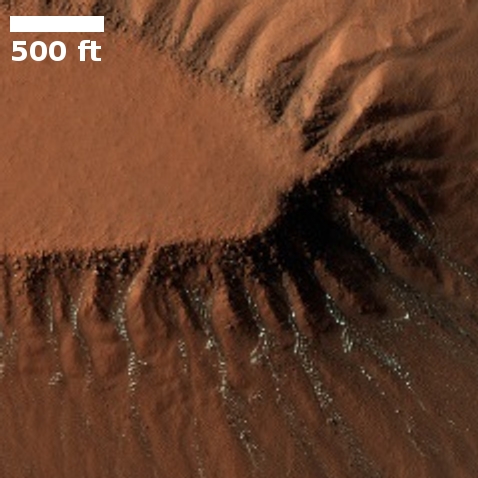 Cool image time! The image to the right, cropped to post here, was taken on August 27, 2020 by the high resolution camera on Mars Reconnaissance Orbiter (MRO). It shows a flat-topped mesa in an enclosed canyon dubbed Sisyphi Cavi in the high southern latitudes of Mars during the spring.

Notice the white spots in the gullies on the southern-facing slopes? From what I can gather from a bit of research, these indicate the presence of carbon dioxide frost. It was spring at this location when the photo was taken. At that time, the thin seasonal mantle of dry ice that covers Mars’ the polar regions south to 60 degrees latitude in the winter is sublimating away. This would explain why the frost is only present in the south-facing slopes. Since this is in the southern hemisphere, the south-facing slopes get much less sunlight, and would sublimate away later.

The photo was taken as part of a monitoring program to study this sublimation process. According to this abstract:

Superposition of channel features over and/or through the defrosting CO2 snowpack shows that the channels are active at the present day and probably have fluid flows every spring during the annual defrosting. In itself, this is a significant observation as active fluid flows of any nature have not yet been proven on Mars. However, the ambient temperature at the time of gully activity appears to require a role for CO2 in the formation of the channels, rather than water.

In other words, the coming and going of this dry ice frost each Martian year, in conjunction with the underground water ice also found here, appears to be causing erosion that then creates of the gullies themselves. More details from the abstract in this paper:

Based on this extensive study, the most plausible mechanism for ongoing gully activity can be divided into two steps: 1) accumulation of material within gully channels via small dry flows on top of the slab ice (comparable to dark dune spots/flows), 2) when a critical mass is reached, the sediment flows down the still frosted gully on top of the sublimating ice or as a mixture of dry material and ice in a catastrophic flow. The triggering factor for the movement of blocks remains unclear, as their timing could not be constrained with the available data. 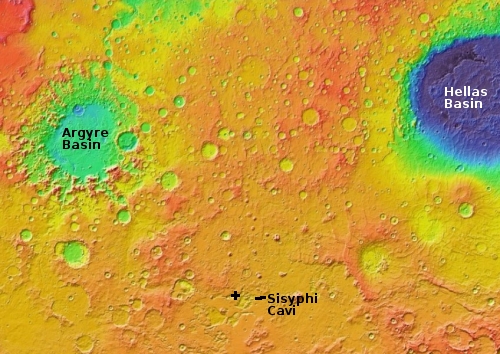 The overview map shows the location of this mesa in Sisyphi Cavi, which is a collection of interconnecting large enclosed depressions at about 70 degrees south latitude, each ranging from 30 to 70 miles in diameter. The erosion being mapped out today gives us a solid hint at the formation process that made this entire depression.

And as usual, though the gullies remind us of similar geological features found on Earth and formed by the flowing of liquid water, on Mars the process appears quite different, and might not even involve liquid water at all. Instead, maybe the annual coming and going of the dry ice is enough.