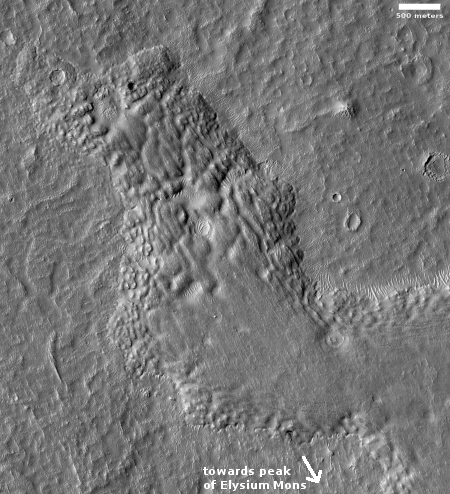 Cool image time! The photo on the right, rotated, cropped, and reduced to post here, was taken by the high resolution camera on Mars Reconnaissance Orbiter (MRO) on October 27, 2019. It shows a dramatic lava flow coming off the flanks of the giant volcano Elysium Mons, a flow that has probably been frozen in place for somewhere between 600 million to 3.4 billion years.

If you look close you can see several craters on top of the lava flow. To my eye these impacts look like they occurred when the lava was still soft, which suggests they were debris thrown up by the volcano. This however would be surprising, as the eruption of Elysium Mons is not thought to have been explosive, but slow and steady. Either way, these crater impacts are one of the ways scientists have been able to estimate the age of this volcano and its long frozen flows.

MRO has taken a scattering of high resolution images in this area, all of which are aimed at similar frozen flows coming off the volcano. All are about 250 miles from the caldera, which gives you a sense of the size and extent of Elysium Mons. While it is the fourth largest volcano on Mars at 7.5 miles high, its grade is so gentle that if you were standing on the surface the peak would be hard to see from any point.