Future lunar colonies at Shackleton Crater at the Moon’s south pole
May 27, 2019 at 9:52 am Robert Zimmerman Points of Information 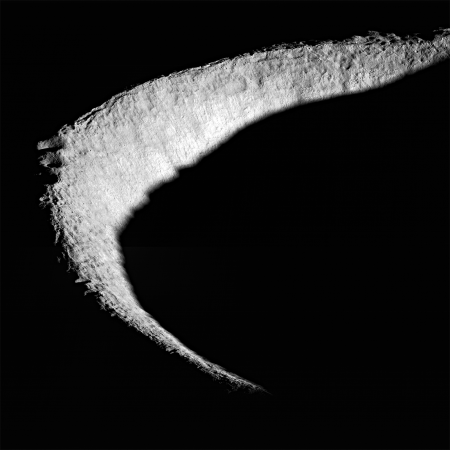 The Lunar Reconnaissance Orbiter (LRO) science team has released a new image of the rim of Shackleton Crater, reduced slightly in resolution to post here on the right. The Moon’s south pole is located on the crater’s rim near the top right of this image. As they note at the link, the interior of Shackleton never gets any sunlight, making it what scientists call a Permanently Shadowed Region (PSR), while a ridgeline running south to de Gerlache Crater gets sunlight 90% of the time.

An elevated ridge runs roughly between Shackleton and de Gerlache craters, and the relatively high elevation of this landscape means that some portions are illuminated up to 90% of the time, but nowhere is permanently illuminated. Future explorers could take advantage of this persistent illumination by setting up solar panels in several closely spaced locations providing nearly constant solar generated electricity.

The proximity to Permanently Shadowed Regions in and around Shackleton crater adds scientific value to this destination, as PSRs are often home to compounds such as water ice that are not found elsewhere on the Moon, but which contain clues to the history of of inner Solar System water and other volatile elements. A nearby, ready source of water-ice would also be of benefit to human surface activities, either as a consumable (air or water) or as spacecraft fuel.

Below is a more detailed map they provide showing this area, with the permanently shadowed regions shaded in blue. The green dot indicates the location of the south pole. The green arrows indicate regions in sunlight in the full image.

Sadly, I expect we are looking at the locations of future Chinese and Indian lunar bases. Though the U.S. has done all the proper legwork to find out the exact locations to build a lunar base at Shackleton, our government has decided we will instead twiddle our thumbs in lunar orbit while other countries use our legwork to land and establish bases on the Moon itself.