Giant impact covered almost half of Gandymede’s surface
August 13, 2020 at 9:31 am Robert Zimmerman Points of Information 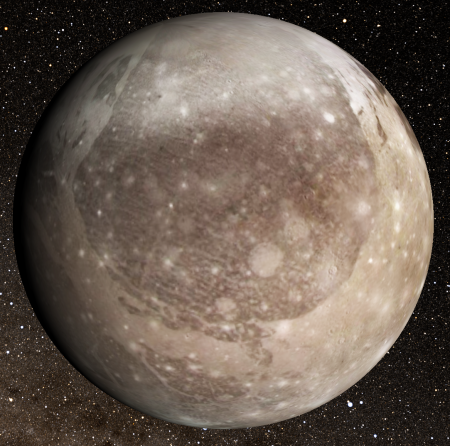 The uncertainty of science: Computer modeling and a review of images taken by Voyager 1 and 2 and the Galileo orbiter of Jupiter’s moon Ganymede now suggest the existence of a giant impact so large that it covers almost half the moon’s surface.

The artist’s illustration of Ganymede on the right, based on our presently incomplete set of global images, shows this impact area as the circular dark region.

Many furrows, or trough formations, have been observed on the surface of Ganymede, one of the Jovian moons. This research group comprehensively reanalyzed image data of Ganymede obtained by NASA’s Voyager 1, Voyager 2, and Galileo spacecrafts. The results revealed that almost all of these furrows appear to be arranged in concentric rings centered around a single point, indicating that this global multiring structure may be the remains of a giant crater. The radial extent of the multiring structures measured along Ganymede’s surface is 7800 km. For comparison, the mean circumference of Ganymede is only 16,530 km. If correct, this is the largest crater yet identified in the Solar System. The previous record holder with a 1900 km radius is on Calisto, another Jovian moon.

The conclusion reached here is very uncertain, since we really do not have a high resolution global map of Ganymede. All three spacecraft were only able to send back a scattering of high resolution images. The global map is based on Earth observations and images from the Hubble Space Telescope.