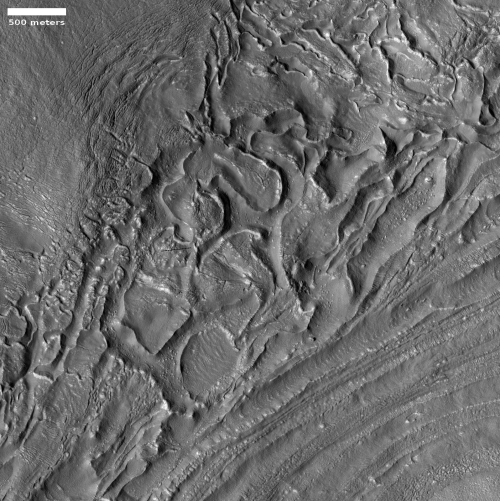 Cool image time! The photo to the right, cropped and reduced to post here, was taken on August 15, 2020 by the high resolution camera on Mars Reconnaissance Orbiter (MRO). It shows a truly strange bunch of blocks beside a clean flow neatly organized in almost straight parallel lines.

What is going on? This location is at 38 degrees south latitude, a latitude where scientists have found a lot of features that resemble water ice glaciers, generally protected from sublimating away by a thin layer of dust and debris.

A first guess is that the smooth glacial flow at the lower right is disturbing the glacial material next to it, causing it to rip apart and break up. At the same time, the hollowed look of these glacial blocks suggests that the ice below that protective debris layer is also slowly sublimating away, causing the surface to sink.

The wider shot below helps confirm this impression. 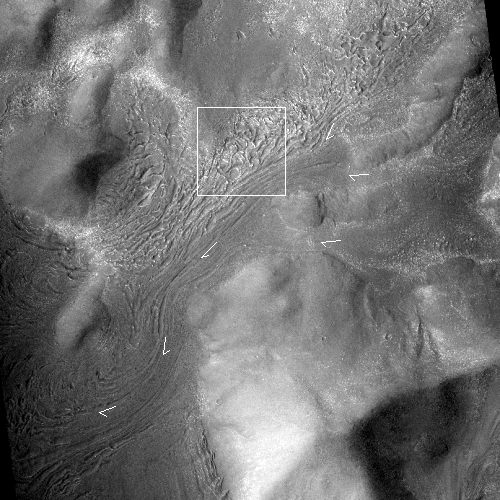 The white box indicates the area covered in the close-up above. I have added arrows to indicate the flow direction. From this image it appears that the flow that so much resembles many glaciers we see on Earth is disturbing the material on its northern edge, breaking it up into blocks almost like the whirling eddies you see along the shorelines of rivers and streams, generally caused by underwater rocks, boulders, logs, and other impediments to the stream’s smooth flow.

This image is located between two major meandering canyons draining into Hellas Basin — Harmakhis Valles and Reull Valles — as indicated by the red cross in the overview map to the right. I have posted a number of other images from this area, all of which suggest extensive glaciers flowing into these two valleys. The black boxes indicate two, as follows:

Today’s image only reinforces the impression given by the earlier photos. There is a lot of buried ice in the mountains and valleys to the east of Hellas Basin, and that ice over eons has flowed into the basin, carving out the meandering canyons we see today.