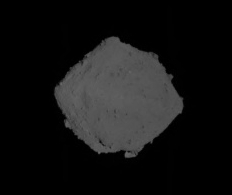 Hayabusa-2 has begun its approach to Ryugu, aiming for a quick touchdown and sample grab at approximately 7:06 pm (Eastern) tonight. The image at the right is the most recent taken during the approach.

Our original schedule planned for touchdown in late October of last year (2018). However, Ryugu was revealed as a boulder strewn landscape that extended across the entire surface, with no flat or wide-open regions. Before arriving at Ryugu, it was assumed there would be flat areas around 100 meters in size. But far than finding this, we have not even seen flat planes 30 meters across!

From the first link above you can see approach images as they are downloaded today, about once every half hour.