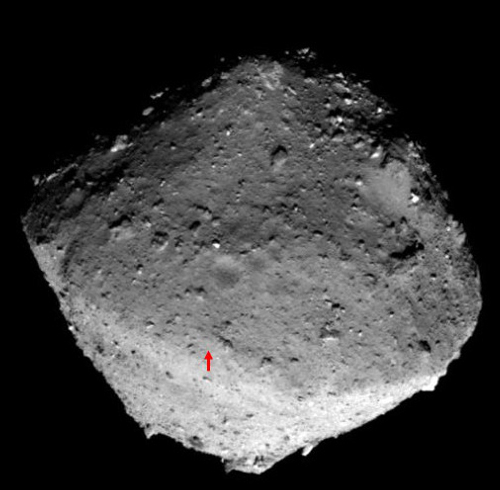 The JAXA science team has released a set of images taken in January by Hayabusa-2 of its landing site on Ryugu, describing how those images helped map the region where touchdown will occur on February 22. The image on the right is one such image.

[It] shows a diagonally imaged photograph of Ryugu, captured by moving the spacecraft towards the direction of the north pole. The upper side of the image shows the north pole and reveals a landscape dominated with many large boulders. The white band extending to the left and right slightly below the center of the image is the equatorial ridge (Ryujin Ridge). The arrow tip marks the planned touchdown site and you can see this site is on the main ridge.

This is the first time we have images the northern hemisphere of Ryugu. In this observation, we acquired data on the equatorial region of Ryugu, the southern and northern hemisphere. Imaging the entire area is very important for creating accurate global shape models for Ryugu.

They should begin beaming images down of the landing approach sometime tomorrow, and will do so about every 30 minutes throughout the sequence.