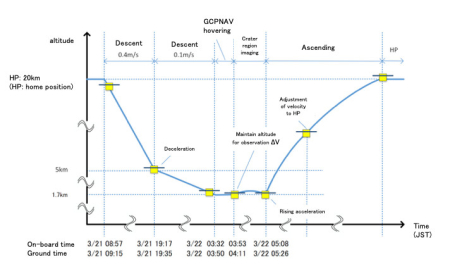 Beginning today Hayabusa-2 will do a two-day close approach of Ryugu in order to get good baseline images of the point on the surface where they will fire an explosive projectile in the first week in April. As they note:

Currently, we have scheduled the small carry-on impactor operation (SCI operation) for the first week in April. The purpose of the SCI operation is to create a crater on the surface of Ryugu, and it is important to be able to compare the asteroid surface before and after the SCI operation.

The graph on the right shows the flight plan. I expect they will do the same for this maneuver as they have done with previous close approaches, and provide real-time images as they happen.