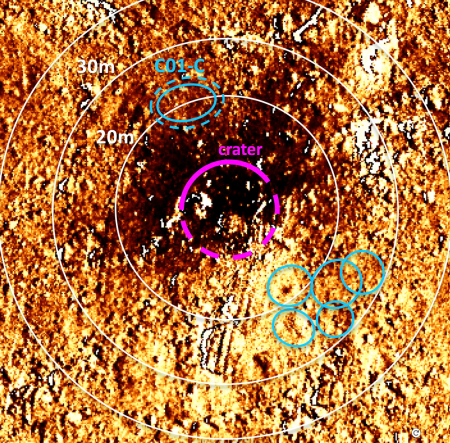 The Hayabusa-2 science team today posted detailed information in two posts about the process that led to the decision to attempt a second touch-and-go sample grab on the surface of Ryugu. The first part outlined in detail what they have learned about the target landing site. The second part described the decision making process.

The image to the right, reduced to post here, is from the second part. It shows the crater they created with a projectile and the target landing site, labeled C01-C. The dark areas show the changes on the surface following the impact. Their analysis of the target site found that, first, they can land there without undue risk to the spacecraft, and, second, they have a high probability of getting ejecta thrown up from the crater in their sample.

Based on all this information, they decided to attempt it, on July 11. I especially like how they stated this decision:

The second touchdown will be attempted on July 11. We will proceed with our mission with care, but boldly go. [emphasis mine]

I am sure my readers will recognize the literary reference.