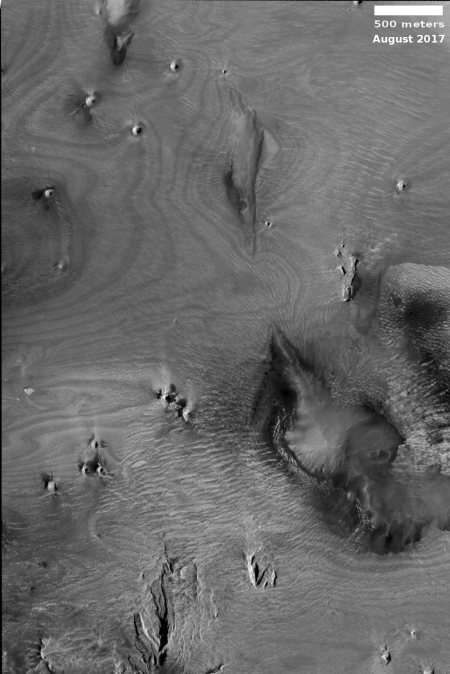 To the right is an image taken by the high resolution camera on Mars Reconnaissance Orbiter (MRO) back in August 2017, cropped, rotated, and reduced to post here. It shows a particular spot on the western slope of the giant volcano Olympus Mons. The uncaptioned image release is entitled “Dark and Possibly Stationary Ripples in Anomalous Terrain.” The image was probably taken as a follow-up to this 2009 image to see if the the dark patches near the peaks and mounds as well as the strange wavy bands of light and dark had changed in eight years. As of 2017 however little had changed. The patches in the 2009 image seem darker, but that is almost certainly due to the lower sun angle causing longer shadows.

The slope goes downhill to the left. The wavy bands are thought to be geological layers exposed by erosion. The cause of the dark patches remain unknown.

I stumbled upon these two early images because of a third new image of this location, taken in February 2019 and spotted by me during my review of April 2019 images downloaded from MRO. That uncaptioned new image was titled “Change Detection in Olympus Maculae.” Had scientists spotted some new volcanic activity at this spot? To find out I dug into the MRO archive at this location and found both the 2009 and 2017 images.

The 2019 image is below. It is cropped, rotated, and reduced to match exactly with the image above in order to highlight any changes that might have occurred. 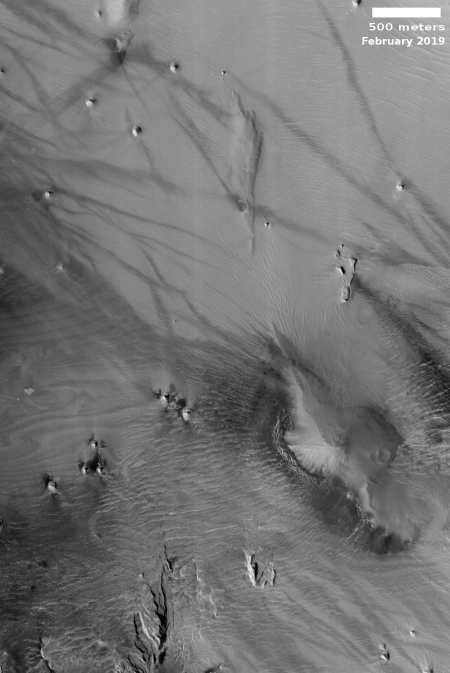 Nope, no volcanic activity. What we do have however are significant changes caused by the 2018 global dust storm, which clearly blew mostly from the west up the volcano’s slope. As it blew it apparently deposited a new layer of dust on top of those wavy bands. You can still see the wavy bands in the middle of the image, but in the top half of the 2019 photograph the bands are covered by a light grey layer.

In addition, the dust storm appears to blown material from the dark patches eastward, overlaying that new grey deposit with darker streaks. Some of these dark streaks could merely be random dust devil tracks, but too many of them originate at the dark patches, suggesting the streaks are material blown from those patches.

What is the dark material? Scientists are still not sure. The dark material heats and cools more slowly than the surrounding lighter material, which suggests it is less dusty. Why it tends to be concentrated near knobs, mounds, and peaks suggests it might be erosional debris from those high points, but that is a guess.

That these dark patches are found in great numbers in this area of the western slope of Olympus Mons suggests they might be related to that past volcanic activity. This is not yet proven.

Regardless, these images show us how the Martian surface evolves. Most of that change comes from winds, and from the more intense winds of the planet’s periodic global dust storms. Knowing this will help scientists better decipher other strange geology on the Martian surface.