Hubble celebrates 29 years in orbit
April 18, 2019 at 10:01 am Robert Zimmerman Points of Information 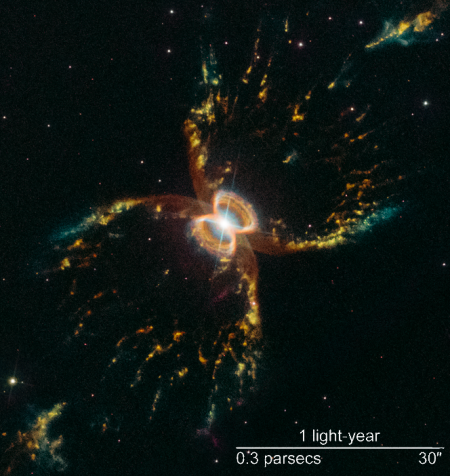 In celebration of the 29th anniversary of the launch of the Hubble Space Telescope, the Space Telescope Science Institute (STScI) that operates the telescope has released a new image of one of the more spectacular astronomical objects in the southern hemisphere, what astronomers have dubbed the Southern Crab Nebula. I have cropped and reduced the image slightly to post it to the right.

The nebula, officially known as Hen 2-104, is located several thousand light-years from Earth in the southern hemisphere constellation of Centaurus. It appears to have two nested hourglass-shaped structures that were sculpted by a whirling pair of stars in a binary system. The duo consists of an aging red giant star and a burned-out star, a white dwarf. The red giant is shedding its outer layers. Some of this ejected material is attracted by the gravity of the companion white dwarf.

The result is that both stars are embedded in a flat disk of gas stretching between them. This belt of material constricts the outflow of gas so that it only speeds away above and below the disk. The result is an hourglass-shaped nebula.

The bubbles of gas and dust appear brightest at the edges, giving the illusion of crab leg structures. These “legs” are likely to be the places where the outflow slams into surrounding interstellar gas and dust, or possibly material which was earlier lost by the red giant star.

The outflow may only last a few thousand years, a tiny fraction of the lifetime of the system. This means that the outer structure may be just thousands of years old, but the inner hourglass must be a more recent outflow event. The red giant will ultimately collapse to become a white dwarf. After that, the surviving pair of white dwarfs will illuminate a shell of gas called a planetary nebula.

Hubble first revealed this nebula’s shape in a photograph taken in 1999.

The telescope was initially designed for a fifteen year mission. It is about to double that, assuming its last remaining gyroscopes can hold on through next year.