Hubble spots most distance active comet yet
September 28, 2017 at 11:13 am Robert Zimmerman Points of Information 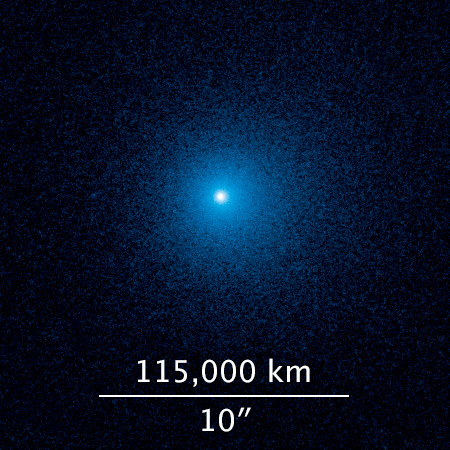 Using the Hubble Space Telescope astronomers have imaged a comet that is sublimating material at a distance from the Sun farther than any previously known comet, out beyond Saturn.

“K2 is so far from the Sun and so cold, we know for sure that the activity — all the fuzzy stuff making it look like a comet — is not produced, as in other comets, by the evaporation of water ice,” said lead researcher David Jewitt of the University of California, Los Angeles. “Instead, we think the activity is due to the sublimation [a solid changing directly into a gas] of super-volatiles as K2 makes its maiden entry into the solar system’s planetary zone. That’s why it’s special. This comet is so far away and so incredibly cold that water ice there is frozen like a rock.”

Based on the Hubble observations of K2’s coma, Jewitt suggests that sunlight is heating frozen volatile gases – such as oxygen, nitrogen, carbon dioxide, and carbon monoxide – that coat the comet’s frigid surface. These icy volatiles lift off from the comet and release dust, forming the coma. Past studies of the composition of comets near the Sun have revealed the same mixture of volatile ices.

The significance here is that by studying the comet’s activity scientists will be able to identify some of these volatile gases, which in turn will tell them something about the make-up of the outermost fringes of the solar system.