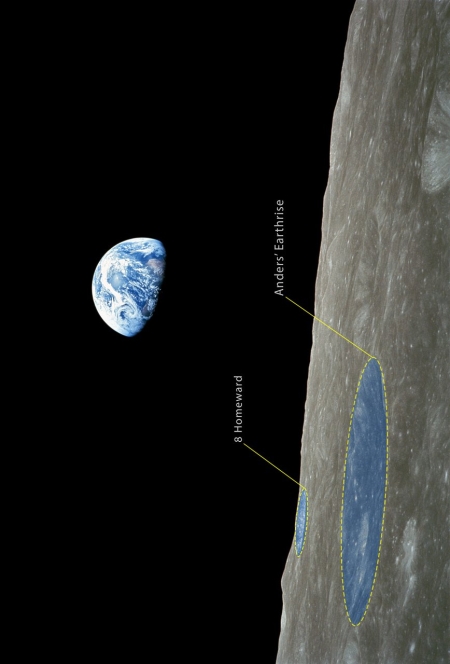 The International Astronautical Union has named two craters “8 Homeward” and “Anders’ Earthrise,” both visible in astronaut Bill Anders iconic Earthrise image, in honor of the upcoming fiftieth anniversary of the Apollo 8 mission to the Moon.

The Working Group for Planetary System Nomenclature of the International Astronomical Union has today officially approved the naming of two craters on the Moon to commemorate the 50th anniversary of the Apollo 8 mission. The names are Anders’ Earthrise and 8 Homeward.

The newly named craters are visible in the foreground of the iconic Earthrise colour photograph taken by astronaut William Anders. It depicts the moment that our shiny blue Earth came back into view as the spacecraft emerged out of the dark from behind the grey and barren Moon. This is arguably the most famous picture taken by Apollo 8. It became iconic and has been credited with starting the environmental movement.

The image is to the right, with the two craters indicated. I have rotated the image so that the horizon is on the right, since is how Anders took it. As I noted in Genesis: the Story of Apollo 8 (now available as both an ebook and audiobook),

Bill Anders’ photograph of earthrise, taken on December 24, 1968, possibly one of the most reprinted photographs ever taken. The way it is usually reproduced, however, with the Moon’s horizon at the bottom, is not how Bill Anders took it.

Instead, the way it is shown on the cover of Genesis: the Story of Apollo 8 is the way he framed it, with the Moon’s horizon on the right. This is also how it is framed at Bill Anders’s home, which also was the first time I had ever seen it oriented that way. When I asked Anders why it was framed that way, he answered, “That’s how I took it.”

To Anders, floating in zero gravity, the earth wasn’t rising from behind an horizon line (which is how a human living on a planet’s surface would perceive it). Instead, floating in a space capsule seventy miles above the moon, Anders saw himself circling the moon’s equator. The lunar horizon therefore appeared vertical to him, and the earth moved right to left as it came out from behind the moon.

In 1968 the IAU had refused to accept some of the astronauts’ naming choices. This honor now somewhat corrects that injustice.

UPDATE: One more historical note: On Saturday there will be a 50th Reunion Dinner for the Apollo 8 astronauts at the Museum of Science and Industry in Chicago. I will be attending, so today is a travel day.