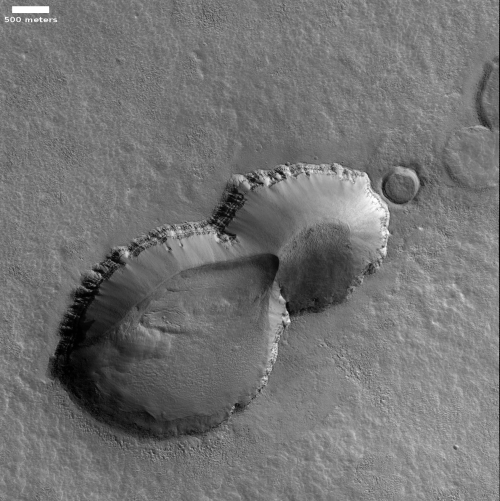 Cool image time! The pit shown in the high resolution photo to the right (image rotated, cropped, and reduced to post here) was taken on January 25, 2021 and labeled by the Mars Reconnaissance Orbiter (MRO) “Collapse Pit in Graben with Ice Fill.”

There is a lot of information in that title. First, a graben is a geological feature where a section of terrain drops relative to the surrounding terrain, producing a depression. Second, it appears the graben in this region is mostly filled with debris, probably wind-blown dust or sand or volcanic ash.

Third, at this particular spot the filling material sank, like a sinkhole on Earth, creating the pit.

And fourth, and maybe most intriguing, the scientists think that this pit is now filled with ice. At 47 degrees north latitude, the location is prime for such ice, and the interior material resembles similar glacial features seen in many other mid-latitude craters. 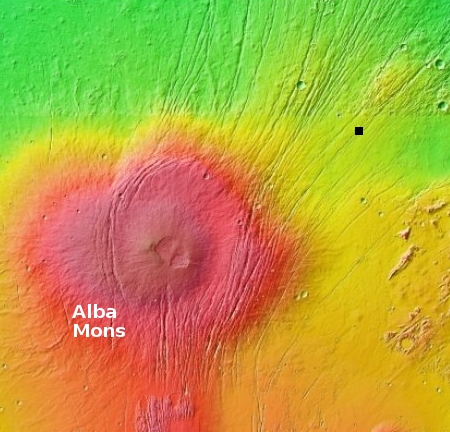 The black box in the overview map to the right marks the location of this pit. Note the long fissures running to the northeast from the shield volcano Alba Mons. It is thought as this volcano bulged upward, it caused these fissures as the ground expanded by the pressure from below. The fissures are the graben referenced above.

Though the fissure at this location is mostly filled, the sinkhole suggests that there may be voids below. If so, there is the chance that an underground facility could be build here, protected from radiation and the harsh swings of temperature on the surface. Digging into it and creating a stable habitat within it might not be easy, however, as the fill material is likely structurally weak. It might be like trying to build something permanent in the sand of a beach.

Or not. We really don’t have a good handle on the properties of the material here. All this image really tells us again is that there is ice readily available in the mid-latitudes of Mars.