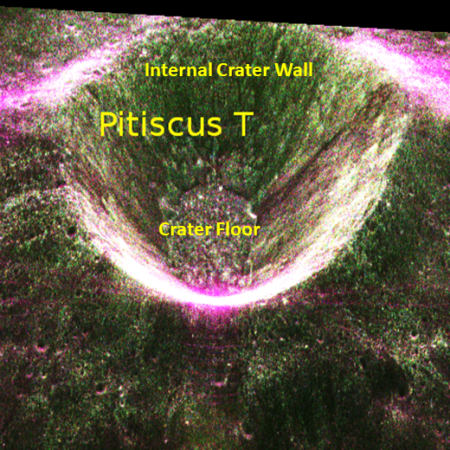 India yesterday released the first radar images produced by its lunar orbiter, Chandrayaan-2, the best such images yet produced by any spacecraft. As their press release notes:

Synthetic Aperture Radar (SAR) is a powerful remote sensing instrument for studying planetary surfaces and subsurface due to the ability of the radar signal to penetrate the surface. It is also sensitive to the roughness, structure and composition of the surface material and the buried terrain.

Previous lunar-orbiting SAR systems such as the S-band hybrid-polarimetric SAR on ISRO’s Chandrayaan-1 and the S & X-band hybrid-polarimetric SAR on NASA’s LRO [Lunar Reconnaissance Orbiter], provided valuable data on the scattering characterisation of ejecta materials of lunar impact craters. However, L & S band SAR on Chandraayan-2 is designed to produce greater details about the morphology and ejecta materials of impact craters due to its ability of imaging with higher resolution (2 – 75m slant range) and full-polarimetric modes in standalone as well as joint modes in S and L-band with wide range of incidence angle coverage (9.5° – 35°). In addition, the greater depth of penetration of L-band (3-5 meters) enables probing the buried terrain at greater depths. The L & S band SAR payload helps in unambiguously identifying and quantitatively estimating the lunar polar water-ice in permanently shadowed regions.

The image on the right, cropped and reduced to post here, is from one of the two images released. The brighter areas indicate rougher terrain as well as the location of ejecta from the crater, some of which is below the surface and is not obvious in optical images.