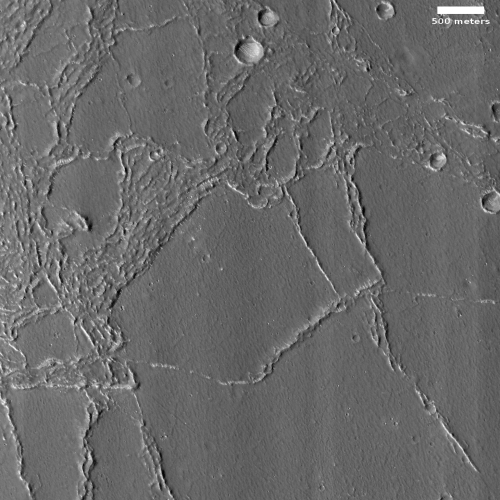 Cool image time! The photo to the right, rotated, cropped, and reduced to post here, shows some unusual geology about 450 miles north of the approximate area where China’s Zhurong rover landed in the northern lowlands of Mars. It was taken on April 14, 2021 by the high resolution camera on Mars Reconnaissance Orbiter (MRO).

These scattered ridges remind me of wrinkle ridges, formed when the surface of a place shrinks. With less surface area, the extra material needs somewhere to go, and so ridges are forced up at weak points to release the pressure.

Assuming this hand-waving explanation is true, the next question would be: What causes the shrinking? The overview map below might help provide an answer. 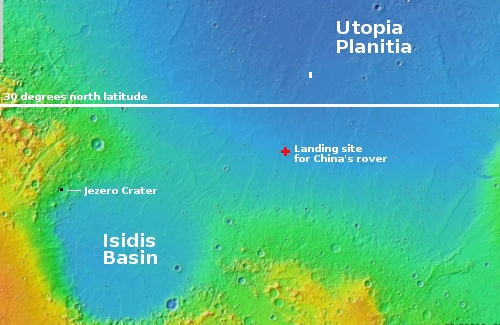 The white rectangle marks the location of these ridges in Utopia Planitia. At 33 degrees north latitude this is a region where it is believed there is much underground ice, some of which should be relatively close to the surface. The shrinkage that caused these ridges could be from some freeze-sublimation cycle as that ice erodes away with the changing Martian climate.

Sounds good, eh? Hogwash. I am only guessing, based on very little information. For one thing, click on the first image above and take a look at the full image. As you move north the ridges begin to fill the space and become ubiquitous. How does my simple theory of wrinkle ridges explain that?

The image appears to be a terrain sample photo, one taken by the MRO science team not based on any specific scientists request but to maintain the camera’s temperature by taking regular images. When they do this they try to snap pictures of interesting things. They succeeded here.

Since no scientist requested this image it means no scientist is doing work to explain these features. Are you a student of planetary science looking for a research project? Here’s one, open for the taking.