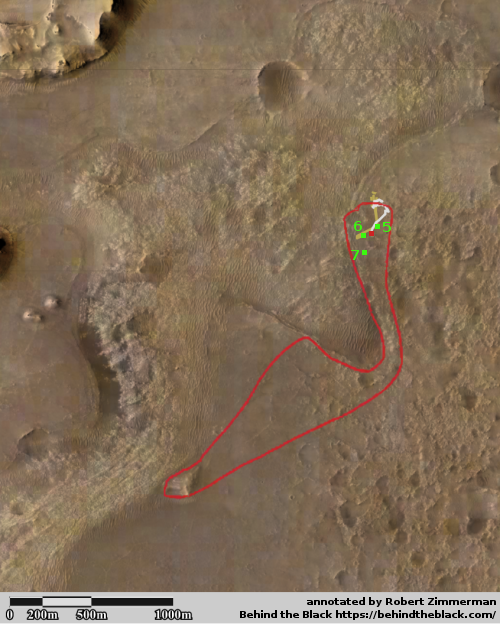 Ingenuity lifted off around 12:34 local mean solar time on Tuesday, which corresponds to 11:54 a.m. EDT (1554 GMT). As planned, the chopper then traveled 348 feet (106 meters) south from its previous location on the floor of Mars’ Jezero Crater, staying aloft for nearly 63 seconds, JPL officials wrote in another tweet. The solar-powered rotorcraft set down at a new airfield, the fourth one it has reached since landing on the Red Planet with NASA’s Perseverance rover on Feb. 18.

Both the rover Perseverance and Ingenuity are traveling south on the floor of Jezero Crater, with the helicopter leapfrogging ahead every few weeks. On the map the red dot indicates Perseverance location, with the green dots Ingenuity’s last three landing sites. They have not yet added to the map exactly where Ingenuity landed yesterday (#7), so I have estimated it based on the information above.

The red outline indicates the region they are planning to explore over the next few months in order to gather a very thorough understanding of the geology of the floor of Jezero Crater. They will eventually head to the northwest towards the cliffs in the upper left, which is the foot of the large delta that flowed in the past into the crater through a gap in its western rim. The route they will take to get there however remains undetermined.